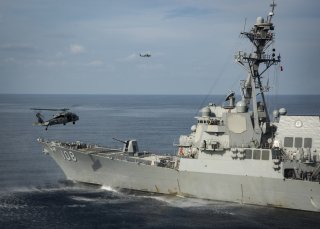 Trump met with Chinese President Xi Jinping at the president’s Mar-a-Lago resort on Friday as well. The order to block North Korean coal was issued soon after Trump’s meeting with Xi concluded.

A dozen North Korean cargo ships loaded with coal were ordered to turn around, according to Reuters.

Dandong Chengtai Trade Co., the largest importer of North Korean coal, said 600,000 tons of coal sat idle in ports and a further 2 million tons of coal is sitting Chinese ports waiting to go back to Korea, according to Reuters.

China’s substituted its Korean coking coal with U.S.-produced coal. It’s a small boon for an industry Trump said he’d fight to help during his 2016 campaign run. China imported more than 400,000 tons of U.S. coal in February.

U.S. Ambassador to the United Nations Nikki Haley recently said China was still getting North Korean coal “through other ways” and asked the country to “take this as seriously as the rest of the world does.”

The Trump administration sent a U.S. Navy strike group to the region, showing their resolve to take action if North Korea gets too out of hand.

Reuters reported that “China and South Korea agreed on Monday to slap tougher sanctions on North Korea if it carries out nuclear or long-range missile tests, a senior official in Seoul said.”

Trump launched missile strikes against a Syrian airfield after the Assad regime dropped chemical weapons on civilians in the northwestern part of the country.

“Tonight, I ordered a targeted military strike on the airfield in Syria from where the chemical attack was launched,” Trump told reporters hours after ordering the strikes. “It is in this vital national security of the United States to prevent and deter the spread and use of deadly chemical weapons.”

“There can be no dispute that Syria used banned chemical weapons, violated its obligations under the Chemical Weapons Convention and ignored the urging of the UN Security Council,” Trump said. “Years of previous attempts at changing Assad’s behavior have all failed and failed very dramatically.”