China Has Its Very Own 'Javelin' Tank-Killer Missiles 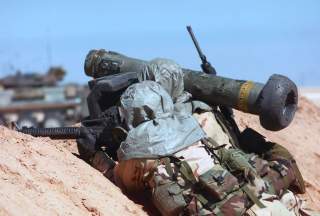 In the 1990s, the People’s Liberation Army (PLA) initiated the development of the successors of the HJ-8 antitank guided missile (ATGM). The new ATGMs were to be more modular, have more features and have a longer range. They looked at foreign missiles such as the Spike, Javelin and Kornet. Only recently have we seen the fruits of their labor: the HJ-9, HJ-10 and HJ-12 ATGMs. Given the HJ-8’s success on the battlefield in Bosnia, Syria and Iraq more than two decades after it first saw service, could these missiles pose a future threat to American tanks?

The HJ-9 is the most conventional upgrade of the HJ-8. Entering development in 1988, it finished development and was revealed ten years later in 1999. The developmental period wasn’t without problems; according to the deputy chief engineer Yang Chunming, guidance was one of the major hurdles that slowed development. During one failed test firing, a test HJ-9 overshot the target and landed in a farmer’s watermelon field. The engineers searching for the missile were assumed to be watermelon robbers by the Chinese villagers, resulting in an incident. Much like the Israeli MAPATS and the South African ZT-3 Ingwe, the HJ-9 is an improved variant of the standard TOW design that the HJ-8 also is a variant of. Like the Israeli and South African designs, the HJ-9 trades the wire-guidance of the TOW and HJ-8 in favor of a laser beam. This allows the missile to be guided more accurately and fly faster. This also increases the maximum range by one kilometer, giving it an effective range of five kilometers. The HJ-9 uses two rocket motors instead of the HJ-8’s one in order to physically be able to shoot out to that range. The laser guidance system can guide to a bit further, 5.5 kilometers, however, at that range the gas used to maneuver the missile may be depleted, limiting the possible angles of maneuver. The HJ-9A improves the HJ-9 further, adding a millimeter wave (MMW) seeker to the missile, effectively making it fire and forget. The most common launch platform for the HJ-9 is the WZ-550 light armored vehicle, a 4x4 wheeled vehicle that can travel at speeds of ninety-five kilometers an hour. Internal sources state that the HJ-9B’s seeker will be up to the PLA’s decision, whether to retain the MMW seeker or to return to laser guidance. In addition, while early HJ-9s lacked the capability to top attack like the TOW-2B Aero, recent advances in Chinese fuzing technology have now made it possible in the HJ-9B.

The HJ-10 was officially revealed to the public in 2011. In its primary antitank form, it is highly similar to the Spike NLOS (nonline of sight). Both missiles are designed to be fire-and-observe missiles via a fibre-optic link between the missile and the vehicle. Similar to the Hafiz launcher for Spike NLOS, the most common HJ-10 launcher is a set of eight missile pods on a Type-04 infantry fighting vehicle chassis. Unlike the Spike NLOS which has a stated range of twenty-five kilometers of more, the HJ-10 has a much shorter range of only around ten kilometers. It does have some interesting capabilities over the Spike NLOS that seem to favor long line-of-sight ATGM engagements. Experts have discerned a possible millimeter-band radar mounted on the HJ-10’s carrier vehicle. While the basic version of the HJ-10 lacks anything but command fiber-guidance, this MMW radar could allow the operators to search and destroy main battle tanks at extreme ranges through obscurants with a relative level of independence. Spike NLOS requires external data to have a rough idea of where the targets are prior to launch. The possible addition of an MMW radar on the HJ-10’s carrier eliminates this requirement and allows the vehicle itself to perform reconnaissance duties. Another advantage versus Spike is are the two terminals for gunners inside, allowing two missiles to be launched and guided simultaneously. An average HJ-10 fire mission would be two missiles fired within ten seconds of each other. Given a fifty second flight time to maximum range, this would mean both missiles impact within a minute of first firing.

The HJ-12 is also a recent development. Unlike the HJ-9 or HJ-10, there’s no real Chinese difference between the HJ-12 and the American Javelin. Both missiles are man portable infantry ATGMs with relatively short ranges (under four kilometers for the HJ-10). Both have top-attack and standard flight modes and use thermal imaging to provide targeting information to the operator. Due to the use of a thermal imager, the HJ-12 is also capable of attacking low flying helicopters and light vehicles like the Javelin. The primary difference here is cost. While the Javelin is an extremely expensive system to purchase, the HJ-12 is said to be far cheaper. There’s even a reduced cost version of the HJ-12 specifically meant for export.

Whether it be the HJ-12 as a cheaper Javelin, the HJ-9 as a powerful line of sight ATGM or the HJ-10 as a powerful nonline of sight solution, the new generation of Chinese ATGMs are looking to be very lethal, modifying the designs of the United States and our allies and putting a little Chinese twist on them. Countering the same kind of technology we are using on the battlefield should be more and more on our minds as we head into an uncertain future.