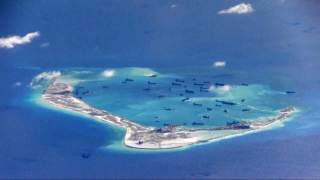 Philippine President Rodrigo Duterte’s rapprochement with China, a gambit that has traded security concessions for economic and investment largesse, has once again been undermined by developments in the South China Sea.

Undisclosed sources, most likely from the Philippine defense establishment, gave the Philippine Daily Inquirer a new cache of satellite images which show China has virtually completed its militarization of the artificially-created islands it controls in the contested maritime area. The high-resolution photos were published on the liberal newspaper’s website on Monday.

Last year, defense establishment sources handed satellite imagery of suspicious Chinese activity close to Philippine-controlled Thitu Island, also in the South China Sea, to members of the opposition and the media. Those photos, too, raised questions about Duterte’s accommodation with China.

As one prominent Chinese academic from Xiamen University’s Southeast Asian Studies Center told the ultra-nationalist Global Times newspaper, “China has the right to build whatever it needs within its territory” in the South China Sea.

Earlier this year, Beijing openly celebrated its expanding military footprint across disputed land features, having reclaimed as much as 290 square meters to augment its already large artificial islands. China admitted that it has deployed advanced radar systems to the area, a supposedly reasonable move for defensive purposes.

The news of Chinese fait accompli in militarizing the features immediately unlashed a firestorm in the Philippines, with prominent statesmen prodding the government to take a tougher stance.

“Has the Philippines been sold? It’s worrisome to see that China’s military bases are almost complete in the [South China Sea],” lamented Senator Benigno Aquino IV, a relative of former president Aquino and a leading voice of opposition.

“While their warships are in our seas, we continue to give in to their whims and, all the while, we are kept in the dark as to our government’s dealings with China,” the senator complained. Previous President Benigno Aquino III confronted China and drew closer to the US for strategic assurances.

Congressman Carlos Isagani Zarate, member of the left-leaning bloc in the lower house of Congress, lambasted the “inaction and deafening silence” of the Duterte administration. He called on the government to end its “see-no-evil; speak-no-evil; hear-no-evil” approach to what he views as “blatant violation of our sovereignty” by China.

Even Duterte’s supporters as well as independent legislators began to air concerns over the Philippine Daily Inquirer photos.

“Any statement from the Philippines that it cannot stop China from militarizing its artificial islands, or from undertaking new reclamations, is actually telling China to proceed because the Philippines will not stand in the way,” said Carpio.

Senator Sherwin Gatchalian, chairman of the Senate Committee on Economic Affairs, launched a hearing which indirectly questioned the wisdom of Duterte’s China-friendly policy.

He complained that the administration has taken a softer stance on South China Sea issues in exchange for economic benefits, but so far “none of these China loans have been consummated.”

Senator Panfilo Lacson, a former police chief and veteran legislator, openly suggested that the country might need to wait out the current administration, hoping that its successor “won’t be too cozy with China.” Duterte is currently serving the second year of a six-year term.

During a press conference, presidential spokesman Harry Roque immediately sought to downplay the issue, suggesting that the land features were “reclaimed during the time of the former administration,” thus “whether or not we like it, they intended to use them as military bases.”

To the chagrin of many observers, Roque expressed unabashed resignation, stating, “So, what do you want us to say? All that we could do is to extract a promise from China not to reclaim any new artificial islands,” which they have violated, according to the latest satellite images.

He insisted that the Philippines has little to none options, since the country “cannot declare war. Not only is it illegal, but it is also… because it’s impossible for us to declare war at this point.”

Caprio immediately lambasted Roque’s defeatist pronouncement, warning that “any statement from the Philippines that it cannot stop China from militarizing its artificial islands, or from undertaking new reclamations, is actually telling China to proceed because the Philippines will not stand in the way.”

Amid massive public backlash, Duterte made a surprising announcement on February 6 that it will halt all marine scientific research activities with foreign countries in the Benham Rise. His government had recently given a state-linked Chinese think tank to “survey” the strategically significant area with local researchers.

Apparently eager to shore up his patriotic credentials, the Filipino president declared the whole area, which resides on the eastern flank of the country, as off-limit to foreigners, including China.

Defense Secretary Delfin Lorenzana told this writer that the Philippines will now proceed with repairing its facilities, particularly the runway, on Thitu Island in the South China Sea. The move is likely to solicit huge Chinese opposition, but the Philippine defense establishment intends to show its willingness to stand up to its new friend when necessary.