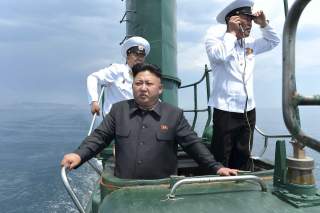 North Korea may be receiving technical assistance from outside powers to develop its submarine launched ballistic missile (SLBM) technology. Pyongyang currently has one experimental Sinpo-B diesel electric ballistic missile submarine (SSB) that it uses for testing while a more advanced Sinpo-C is currently thought to be under construction.

As two prominent U.S. experts on submarine technology note, developing the launch mechanisms for ballistic missile submarines is extraordinarily difficult. However, Pyongyang is making extremely rapid technological progress compared to much more sophisticated states that have developed such technologies in the past. That suggests there might be an outside hand involved in providing technical expertise.

“Building an SLBM and SSB (or SSBN) is very technically challenging – launch system, proper navigation inputs to missile prior to launch, proper depth-keeping for submarine, etc.,” retired U.S. Navy submariner Thomas Callender, currently a senior research fellow for defense programs at the Heritage Foundation and former director of capabilities at the Office of the Deputy Under Secretary of the Navy (Policy) told The National Interest.

“From the short time between failed missile ejection and successful ejection (Nov 2015-July 2016), it would appear that North Korea is receiving technical help from the Chinese. If you look at how long it took the Chinese and Indians to develop their indigenous SLBMs and SSBNs (15-20 years), North Korea is progressing much more rapidly especially in correcting issues after failures.”

Bryan Clark, a retired U.S. Navy undersea warfare officer and analyst the Center for Strategic and Budgetary Assessments, suggested that while the requisite missile ejection technologies are difficult to master, it is probably not beyond the capabilities of North Korean engineers.

“Since they have ballistic missiles and submarines the technically-challenging part is the launch mechanisms,” Clark told The National Interest.

“It needs to eject the missile from the ship and into the air without damaging the missile, and the missile needs to start up after it leaves the water. Those technologies and well-established and North Korea’s engineers can probably build something that will work.”

Callender suggests that Pyongyang could have an operational fleet of SSBs early in the next decade given North Korea’s current rate of technological progression.

“If they keep progressing at this pace, I could see them having an operational SSB with one to two SLBMs by the early 2020s,” Callender said. “This would be very limited in range (both sub and SLBM), plus North Korea does not have the quieting technology, so even with those diesels, she will be more detectable than more advanced SSKs.”

Unlike more sophisticated nuclear-powered ballistic missile submarines (SSBN) such as the Russian Project 955A Borei-II or the American Ohio-class or Columbia-class boomers, the North Korean SSBs are likely to stay close to home. That could limit their effectiveness as a nuclear deterrence tool.

“I think she would have a hard time getting within range of any U.S. territory in the near-term. Even to get within range of Hawaii would be a transit of over 2000 nm at slow speed (and she would still have to snorkel during this transit),” Callender said.

Clark agreed with Callender’s assessment—the North Korean SSBs would likely stay close to their own shores.

“Because their submarines and missiles are not particularly sophisticated, however, I would expect they plan to keep the SSB in waters close to the North Korean coast and launch missiles from a stationary position, including potentially while the submarine sits on the seafloor,” Clark said.

“This approach would make command and control easier and more secure.”

However, that approach does have disadvantages. The North Korean SSBs would be much more vulnerable to allied anti-submarine warfare (ASW) efforts since they would not be able to disappear into the vastness of the ocean. Moreover, unlike the Russians and Chinese, the North Koreans do not have sufficient naval forces to create a fortified bastion to protect their ballistic missile submarines.

“Because the SSB won’t be roaming around a large area, ASW against it would be easier,” Clark said.

“But the North Korean leadership probably assesses the stealth gained by just submerging the SSB, even close to shore, will give them at least a small retaliatory capability in the event of a large-scale attack on their nuclear facilities ashore. The SSB would be intended as a deterrent, rather than as part of what they may initially use against the U.S. or its allies.”

While the Sinpo-C might eventually provide Pyongyang with a rudimentary retaliatory second strike capability, it is not comparable to the true strategic deterrent provided by an SSBN such as the U.S. Navy’s Ohio-class boomers. “To be a true undersea nuclear strategic deterrent leg, requires an SSBN with its long endurance (and range if its missiles are limited in range),” Callender said.

But then, North Korea probably does not need more than a rudimentary capability to deter the United States and its allies—Japan and South Korea as right next door.