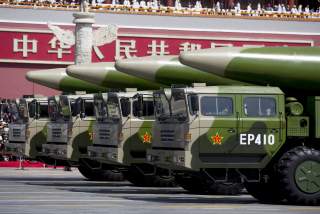 As tensions continue to mount following North Korea’s latest nuclear test, the Chinese military has conducted another drill near the Korean Peninsula.

According to the South China Morning Post (SCMP), a Hong Kong-based publication, on Tuesday a Chinese ground unit practiced shooting down simulated low flying missiles over Bohai Bay. Bohai Bay is “ the innermost gulf of the Yellow Sea between China and North Korea,” the report noted. Although few details were given, including which defense systems were used, Chinese websites indicated the test sought to simulate a surprise attack in a realistic, warfighting scenario.

Tuesday’s drill was the third time the Chinese military has conducted an exercise in the Bohai Bay in the last month and a half. The first one took place back in July to celebrate the ninetieth anniversary of the founding of the People’s Liberation Army. That drill was a three-day naval exercise.

The second drill came a week later following North Korea’s second test of an intercontinental ballistic missile (ICBM) on July 28. This drill appeared to be much larger than the first. UPI reported at the time, citing CCTV, China's national broadcaster, that “surface ships, submarines, air support and coastguard forces took part in the drills,” which also included tests of dozens of missiles. UPI also noted that “aerial interception and assaults by land and sea, the simulation of real combat conditions, were all part of the drills.”

Although it has intensified since July as tensions have rose, this is part of a larger trend of China’s military— particularly its navy— conducting drills close to Korea. As SCMP has noted, “Since the start of 2015, the navy has carried out most of its reported drills in the Bohai and Yellow seas off North Korea and Japan.” That includes seven drills in the area in 2015 alone.

There were also reports when North Korea was preparing a nuclear test in April that China’s military had begun amassing troops on the two countries’ shared border. Senior U.S. military and intelligence officers disputed that any mobilization had occurred, noting that China routinely maintains around 250,000 troops along the border with North Korea. Nonetheless, it is believed that Pyongyang delayed conducting a sixth nuclear test in April because of pressure from Beijing.

Moreover, the Wall Street Journal has reported that China has taken a number of steps to fortify the border region. “Recent Chinese measures include establishing a new border defense brigade, 24-hour video surveillance of the mountainous frontier backed by aerial drones, and bunkers to protect against nuclear and chemical blasts,” the paper said back in July.

Like China’s rhetoric, the drills in Bohai Bay are almost certainly an attempt to simultaneously send messages to North Korea and the United States. Although Beijing doesn’t appreciate Pyongyang’s provocations—especially when President Xi Jinping needs to shore up domestic support ahead of the 19th Party Congress next month—China is equally insistent on setting red lines for the United States.

These positions were clearly on display at the emergency meeting held at the UN Security Council on Monday, following North Korea's nuclear test last weekend. While Liu Jieyi, China ambassador to the UN, criticized Pyongyang for carrying out the test, he also warned that “China will never allow chaos and war on the peninsula.”

This sentiment was echoed in an editorial in the Global Times, a Chinese tabloid, after North Korea threatened to test missiles near the U.S. territory of Guam last month. On the one hand, the Global Times argued: “China should also make clear that if North Korea launches missiles that threaten US soil first and the US retaliates, China will stay neutral.” On the other hand, it warned: “If the US and South Korea carry out strikes and try to overthrow the North Korean regime and change the political pattern of the Korean Peninsula, China will prevent them from doing so.”

In other words, China’s position remains unchanged since the 1950s, when it allowed the United States to help South Korea push back a North Korean invasion, but intervened once the U.S.-allied forces began to conquer the Democratic People’s Republic of Korea in a counteroffensive.

Image: Anti-aircraft artilleries drive past Tiananmen Gate during a military parade to mark the 70th anniversary of the end of World War Two, in Beijing, China, September 3, 2015. REUTERS/Jason Lee