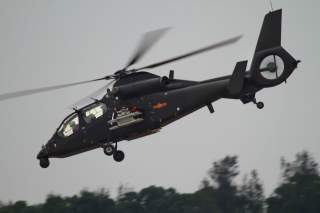 A new variant of China’s Z-19 multirole reconnaissance/attack helicopter wrapped up its firing tests this week. This version of the Z-19 series, which entered service with the Chinese military in 2012, displayed its ultra-maneuverability, and its developer, state-owned Aviation Industry Corporation of China (AVIC), has placed high hopes on its marketability overseas.

This export model, the Z-19E, conducted multiple flight tests with air-to-air and air-to-ground missiles as well as rocket projectiles in precision attacks, witnessed by a group of foreign diplomats invited to observe the drill, according to People’s Daily.

The single-rotor Z-19E has a tandem cockpit and a narrow body with miniaturized and comprehensive avionics and weapons systems as well as a millimeter-wave fire-control radar on board, for multitasking in all-weather conditions. Specifically, the versatile helicopter has two pylon stores for rockets, gun pods, and eight HJ-8 or other anti-tank/air-to-surface/anti-ship as well as air-to-air missiles.

The model features a large effective payload with a maximum takeoff weight of 4.25 tons on the strength of a pair of WZ-8C turboshafts of 940 horsepower each. Another feature is its helmet-mounted display to project information to the pilot’s eyes.

Like numerous other weapons and aircraft that China is pitching for overseas orders, the spy and attack helicopter is modeled on commercial components from a foreign product, in this case the Eurocopter AS365 Dauphin series, which was license-built by AVIC.

The Pakistani and Malaysian air forces are said to be potential buyers of the series, according to Chinese news portal Sina.

A China Central Television program on the drills also made no bones about the use of the Z-9 and Z-19 helicopters to beef up the People’s Liberation Army’s sea assault capability in confronting Taiwan or other foes in the South China Sea, amid talks that the Taiwanese military attempted to lay siege on PLA warships with wolf-pack tactics consisting of armadas of agile, high-speed missile gunboats.

“Our anti-ship attack helicopters can easily counter this scheme and destroy these small boats of Taiwan,” one commentator said during the program.