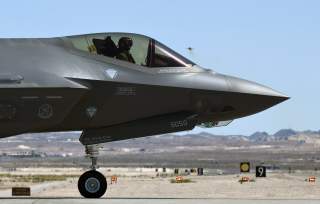 A new Chinese surveillance aircraft could take away a key advantage of American stealth jets.

China is building a carrier-launched plane equipped with advanced early-warning radar that could even spot stealth jets from afar.

Official state media has confirmed the development of the long-rumored KJ-600, a twenty-five to thirty ton twin turboprop plane built by Xian Aircraft Corporation with a large AESA (Active Electronically Scanned Array) radar, which has the reported capability of locating stealth aircraft like U.S. F-22s and F-35s over two hundred miles away.

The sophisticated radar system emits radio waves along rapidly changing frequencies making it difficult to evade. China’s newest navy ships are equipped with this powerful radar system, but when the KJ-600 enters service it will provide naval operations with a significant boost.

Chinese carrier battle groups currently have limited radar range due to the curvature of the earth. Low-flying objects and other ships are hard to detect at a distance, but as an air-based radar system the KJ-600 will act as an “eye in the sky” allowing ships to better see over the horizon.

But according to Zhou Chenming, a military analyst at the Knowfar Institute for Strategic and Defense Studies, while the KJ-600 and the E-2 will have similar capabilities the Chinese version has a crucial edge.

“The biggest advantage of the KJ-600 is it’s equipped with a more sophisticated radar and communication system allowing it to monitor a wider range of signals and even detect stealth fighters in a certain angle,” Zhou said.

Early-warning aircraft are a critical component of advanced carrier operations. They are designed to detect aircraft, ships and vehicles at long ranges, locate strike targets, and coordinate air and ground attacks in combat by directing fighter jets.

In addition, these aircraft can conduct surveillance above ground targets, serve as a communications relay for land and naval forces, and during disasters can even act as emergency air-traffic controllers.

But China has yet to deploy these types of capabilities because its existing early-warning aircraft are too heavy and slow to take off from China’s two ski-jump style aircraft carriers. But China is at work on its third carrier, which will use an advanced electromagnetic launch system (EMALS) that analysts believe can launch the KJ-600.

The Liaoning, China’s first carrier based on a rebuilt Russian hull, is currently the only one in full service, but the Type 001A, the nation’s first domestically designed and built carrier, is expected to enter full service later this year. By 2030, China has plans for four active carrier battle groups.

According to Dr. Collin Koh, a research fellow at the Institute of Defense and Strategic Studies, the KJ-600 is a clear signal that China is preparing its carrier groups to operate far from its shores.

“If China’s carrier group is designed more to operate closer to home waters, it would rely on shore-based early-warning support,” Koh said.

“But with [the early-warning] planes, it implies that the People’s Liberation Army Navy carrier battle group is designed for distant sea operations . . . requiring . . . a more comprehensive early-warning umbrella.”

China’s public acknowledgment of the KJ-600 come as the United States shifts more resources to the Asia-Pacific region—including stationing F-35s in Japan and B-2 stealth bombers in Guam as well as a rare exercise involving three U.S. Nimitz-class carriers in the Western Pacific.