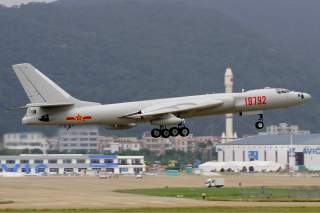 China would be willing to offer the North Korean regime protection if it abandoned its nuclear weapons, a well-known Chinese paper reports.

North Korea’s primary reason for developing nuclear weapons is the preservation of the state and the regime through deterrence, yet the U.S. and its allies refuse to accept a nuclear-armed North Korea. Evidence suggests that North Korea may be preparing for another nuclear test this weekend.

“This path has no outlet … it doesn’t matter if North Korea tests a few more nuclear bombs or a few more missiles. It will not make any difference,” the Global Times, an outlet affiliated with the state-run People’s Daily, the paper of the ruling Communist Party, wrote Thursday. “Washington does not fear North Korea, and another nuclear test increases the likelihood that the U.S. will use military force.”

North Korea’s current course is not sustainable and is putting the survival of the regime in jeopardy. “If North Korea does not end its nuclear activities, this end is inevitable,” the newspaper explained, adding that even if the U.S. does not attack it, sanctions will eventually cripple the North Korean state.

“Pyongyang may assume that atomic bombs and intercontinental ballistic missiles are the keys to ensuring national and political security, but this is wrong,” the Global Times argued, further commenting that the international community, China included, will not stand idly by while North Korea tests increasingly-powerful nuclear weapons.

“Beijing will not patiently allow Pyongyang to continue its nuclear activities. This is where the U.S. and China are in agreement,” the paper noted, “The difference is that Beijing insists on a peaceful solution that does not threaten the regime, while Washington may use force and take extreme measures.” In a separate article, the outlet reported that President Donald Trump, who recently bombed Syria for crossing the line with chemical weapons, is a man “who honors his promises” and may take military action against North Korea’s nuclear weapons program. Reports suggest that China’s People’s Liberation Army has been put on alert for a possible contingency on the peninsula as tensions rise.

“If North Korea complies with China’s advice and suspends nuclear activities, China will actively work to protect the security of a de-nuclearised North Korean nation and regime,” the Global Times wrote, adding that China is willing to build a positive future for both sides of the Yalu River.