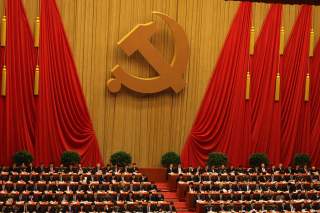 The Trump administration believes China will resolve the crisis on the Korean Peninsula, but Beijing’s thinking is not aligned with that of Washington.

“It’s a very dangerous situation, and China can end it very quickly in my opinion,” President Donald Trump told Reuters in February. “I think China has tremendous control over North Korea whether they say so or not. They could solve the problem very easily if they want to.”

Trump recently took a step back from his former rhetoric, explaining to the Wall Street Journal that “it’s not so easy.”

The president, administration officials and certain congressional leaders have continued to encourage China to pressure Pyongyang to abandon its aggressive pursuit of long-range missiles and high-yield nuclear weapons.

The Department of State has expressed similar sentiments.

“China has indicated appreciation of the urgency of the threat, the need to have an international coalition mounted, and a need for China to do more in stepping up pressure on the North Korean regime and trying to make it clear to them that there is no tolerance for these illegal programs, both the ballistic missile programs and the nuclear programs,” acting assistant secretary of the Bureau of East Asian and Pacific Affairs Susan Thornton told a group of reporters Monday.

“China is also making clear that it is committed to denuclearization of the Korean Peninsula and that it will do its utmost,” she added. “President Trump is very hopeful that the Chinese will use the considerable leverage that they have over the economic lifeblood of the North Korean economy in the service of this effort.”

Beijing may not be on the same page though.

“China is not the culprit of the issue nor does it hold the crux and the key to resolving it,” Chinese Foreign Minister Wang Yi argued Monday, emphasizing that the U.S. will decide whether or not there is peace on the peninsula.

Chinese companies have been involved in the transfer of foreign technology to North Korea, and many of those products made their way into North Korean missiles, reports the Wall Street Journal. During the recent military parade in Kim Il Sung Square in Pyongyang, North Korea’s missiles were rolled out on Chinese trucks.

China recognizes that North Korea is a problem, but it is pursuing a distinctly different path to a resolution than the U.S. Beijing has been encouraging both countries to engage in dialogue and is critical of Washington’s willingness to apply military pressure. Neither Pyongyang nor the U.S. have expressed an interest in talks.

The division may complicate attempts at a peaceful resolution with China’s assistance.