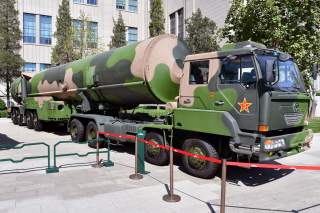 China, according to the Federation of American Scientists, has 270 warheads in its nuclear arsenal.

The Washington-based research group’s estimate has never been challenged by the Pentagon. It compares with an official tally of 4,480 nuclear warheads for the US. Unlike the American side, China also renounces “first use” of nuclear weapons and holds that its ability to retaliate is sufficient to deter attack.

Why, then, is Beijing’s modernization of its nuclear arsenal — something that Washington is also doing — considered a major security threat requiring a sharp turn in US policy regarding the use of nuclear weapons?

That’s part of the reasoning behind the Pentagon’s 2018 Nuclear Posture Review (NPR) issued on February 2. The document is a benchmark US statement on nuclear policy and is drawn up by new presidents. The Trump administration’s first policy position on the issue focuses on creating new nuclear deterrents to Russia and China, while addressing North Korean and Iranian nuclear ambitions.

Unlike previous NPRs, the White House sees a rapidly deteriorating security environment for the US in which Russia and China are bumping up their nuclear capabilities. It argues the US should follow suit. Most of the analysis focuses on Russia but China is also singled out because of “its lack of transparency regarding the scope and scale of its nuclear modernization program.”

Among other things, the review spotlights China’s ability to putmultiple warheads on its silo-based ICBMs, and its development of missile submarines and strategic bombers, as evidence of a growing threat.

But critics contend the latest NPR reverses years of bipartisan consensus on the use of US nuclear weapons. The review also gives the go-ahead to develop low-yield tactical nukes and sub-launched cruise missiles in the first roll-out of new US nuclear weapons since the end of the Cold War. It also expands the circumstances under which the US would consider using nukes to include “non-nuclear strategic attacks” such as cyberattacks.

The review further confirms that the US has begun preliminary R&D on a new ground-launched intermediate-range missile system that, if deployed, would violate a decades-long Intermediate-Range Nuclear Forces (INF) treaty with Russia.

Greg Thielmann, a nonproliferation specialist on the board of the Washington-based Arms Control Association, noted that President Obama’s prior 2010 NPR laid the foundation for reducing the role of nuclear weapons in US defense policy. He also credits Obama for seeking a one-third reduction in US nuclear strategic forces that the Pentagon says would still allow the US to meet all military contingencies.

“Trump’s NPR has reversed course, calling for an increase in the role and types of nuclear weapons and essentially abandoning the nuclear arms reduction efforts to which it is legally committed by the nuclear Non-Proliferation Treaty,” Thielmann told Asia Times. “All this is based on a highly misleading characterization of nuclear and missile developments in Russia, China, and North Korea.”

Thielmann’s assessment is backed by other disarmament advocates. “Ever since Richard Nixon, American presidents have cut the size of the US nuclear arsenal,” Joe Cirincione, the president of the Ploughshares Fund, said in an Op-Ed published by military website Defense One on February 2. Cirincione blames Trump administration hawks for the shift in US nuclear policy.

Chinese not on nuclear ‘alert’

Gregory Kulacki, the China project manager for the Union of Concerned Scientists (UCS), a Washington-based science advocacy group, argues that Trump’s NPR is surfacing at a time when China isn’t preparing to fight a nuclear war with the US. He says his talks with Chinese nuclear strategists indicate they don’t believe such an attack from the US is possible because the Americans know a sufficient number of Chinese missiles would survive to launch a nuclear counter-strike.

“That’s not a high bar to meet, which is why China’s nuclear arsenal remains small and, for the time being, off alert,” Kulacki pointed out in a February 9 article published by the nonprofit Lawfare Institute.

A UCS white paper also asserts that the nuclear gap between the US and China is already too large to argue that the US is falling behind China in any serious way.

China, for its part, has urged the US to drop its “Cold War mentality” and not misread its intentions in modernizing its nuclear forces following the NPR’s release.

Kulacki notes in his article that Chinese strategists have one worry: they fear the US might miscalculate by thinking it could escape full nuclear retaliation by using a massive first strike along with an anti-missile shield that can down any Chinese missiles that a pre-emptive attack would miss.

US negotiators, he says, are exacerbating such fears by declining to assure their Chinese counterparts that a US first strike is “off the table.”

China’s relatively modest nuclear modernization efforts, according to Kulacki, are designed to ensure that enough of its intercontinental ballistic missiles (ICBMs) can survive a pre-emptive US attack and penetrate US missile defenses.

“In the absence of a no first-use commitment from the United States, these improvements are needed to assure China’s leaders their US counterparts won’t take the risk of attacking China with nuclear weapons,” Kulacki says in his piece.

While acknowledging that China’s declared policy and doctrine on nuclear weapons use “have not changed,” the NPR nonetheless chides China for not divulging more about its nuclear modernization program to the US.

However, Kulacki stresses there’s scant evidence that China is preparing to fight a limited nuclear war by modernizing its nuclear forces.

On the upside, Trump’s policy statement expresses a willingness to “seek a dialogue with China” to “help manage the risks of miscalculation and misperception.” But Kulacki says Washington’s, and Beijing’s, current preoccupation with the North Korean nuclear crisis has stymied further bilateral discussions on nuclear weapons policy.

Others say the NPR doesn’t go far enough in countering China’s nuclear challenge to the US.

“(The NPR) is still mired in the notion of ‘deterrence.’ What do we do when deterrence fails and the other side actually uses (nuclear weapons) or is clearly about to use them?,” said Angelo Codevilla, a former senior US national security official, speaking to Asia Times.

Those favoring a harder US stance against China also tout evidence that Beijing is replacing single warhead nukes with Multiple Independent Reentry Vehicles (MIRVs) that carry up to eight warheads on a single missile.

If true, this would allow China to boost its ICBM warheads to 500 and beyond. The NPR emphasizes that China has developed “a new multi-warhead version of its DF5 silo-based ICBM.”

But Kulacki noted in a recent blog that “China has had the ability to put multiple warheads on its largest silo-based ICBM for decades” and only recently chose to add 20 warheads using MIRVs.

“It is a small increase and it is misleading to characterize it as an ‘entirely new’ capability,” Kulacki said, pointing out that the US has placed MIRVs on ICBMs since the 1970s.

This article by Doug Tsuruoka originally appeared on Asia Times.