China and Russia are Catching Up to the U.S. Military 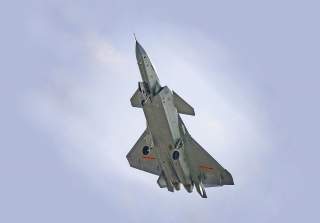 America’s enemies are rapidly catching up and in some cases exceeding the United States in terms of military technology, according to a senior U.S. Navy official. In some cases, while it took the United States decades to master certain technologies, adversaries like Russia and China are mastering weapons such stealth aircraft and networked air defense systems much faster than expected.

“What we have got to do, is we’ve got to begin to challenge ourselves and industry and the government in how do we attack those pieces that we have that have been broken by some of the advances that our adversaries have made,” Rear Adm. Mark Darrah, the Navy’s program executive officer for unmanned systems and strike weapons told the Navy League’s Sea, Air and Space symposium on April 4. “The bottom line is, right now, our adversaries are moving up a curve that is not linear.”

Coming in second place in combat does not matter, Darrah said. The United States must innovate to defeat enemy advances. “We know who our adversaries and we also know what hardware they’re putting out there,” Darrah said. “This isn’t trivial, they are actually putting out capabilities—it isn’t a science experiment any more–it’s real hardware, it’s really flying, it’s really capable.”

While Darrah was reluctant to discuss details, he told The National Interest that advanced networked enemy air defense are one of those areas concerns–as are enemy advances such as fifth-generation stealth fighters and advanced long-range air-to-air missiles.

However, the Navy does have unique capabilities that it must leverage in new ways. Instead of thinking in terms of platform but in terms of roles. “We have got get to a more roles based approach,” Darrah said.

That means that every platform, every sensor and every weapons would automatically correlate and share a single seamless picture. Depending on the situation, each node of the so-called “kill web” could switch function and share data with a manual prompt. In the next several years, Darrah said that the Navy will running a demonstration called MOTLEY CREW where a salvo of different types of will share data and cooperatively engage a target.

For example, Tactical Tomahawks could share sensor data and information with a Long Range Anti-Ship Cruise Missile while inbound to a target. The weapons could then adjust their actions accordingly. Indeed, it the plan works, the Navy would need fewer weapons to hit targets because it would no longer need to build in the level of redundancy it does now.

“If we collaborate and see what all the apertures see simultaneously in real time and share that between the weapons or the aircraft, they’ll know which of those targets each of them is looking at,” Darrah said. “We can do this. We have to do this.”

The platform do not matter—it is what the platform carries that will matter. If the Navy’s plan works it would greatly increase the lethality of the service’s forces. “They can be any platform,” Darrah said.