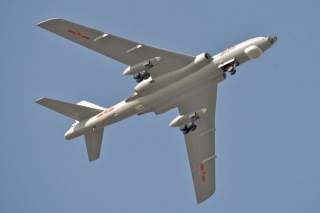 Chinese bombers participated in a joint air-sea military exercise near Taiwan and the Philippines this week.

A Chinese Navy official downplayed the importance of the drills, claiming they were routine and in line with international law.

"During the drills there was no impact upon freedom of navigation or fly-through in the relevant seas or air," the official said, Reuters reported. He added: "Going forward, similar drills and exercises will keep taking place.”

According to Want China Times, photos of the drill reveal that it included both China’s H-6G/K strategic bombers and J-11B air superiority fighter jets.

It is believed that the H-6G is only intended for missile targeting, and may not even carry any payloads itself. However, the H-6K is the most advanced variant of China’s H-6 bomber series. As Richard Fisher, a leading expert on China’s military, has noted: “the H-6K is the most radically modified variant, replacing its glass nose with a large solid nose housing a large radar and new electro-optical targeting pod. Its use of two Russian-made 12-ton thrust D-30-KP2 turbofans and lighter-weight composites have reportedly extended its range by 30% to a combat radius of 3,500 km.”

Regarding weaponry, Fisher has explained that “The H-6K carries six KD-20 LACMs [Land-Attack Cruise Missiles] on wing pylons plus one or more in its bomb bay. It can also carry a wide range of new precision-guided munitions available from four Chinese weapon manufacturers.”

For its part, Chinese state-owned media has said of the bomber: “medium-sized craft designed for long-range attacks, stand-off attacks and large-area air patrol. Unlike its predecessor, the H-6K can carry cruise missiles under its wings. The H-6K also maneuvers more deftly than the H-6 and requires a smaller crew to operate.”

The J-11B fighter is a derivate of the Russian-built Su-27SK that contains a significant number of upgrades and Chinese products. Perhaps most notably, the J-11B is powered by the Chinese built WS-10 engines rather than Russian ones like the J-11A. China’s aerospace industry has struggled to build sufficiently powerful engines for its military aircraft.

The apparently now routine joint air-sea exercises China is conducting in the area are likely to greatly unnerve Taiwan. One perceived weakness of China’s military forces are their lack of training, particularly joint training among China’s different military services.

An assault on Taiwan would require the seamless integration of Chinese naval and air assets along with amphibious forces. Thus the drills, which China’s defense ministry claimed were not directed at any specific country, will enhance the PLA’s preparedness for an attack on Taiwan.

The drill in the Bashi Channel comes just weeks after Beijing sent H-6K bombers through a key strategic strait near Japan. As The National Interest previously reported, the PLAAF recently sent the bombers through the Miyako Strait, which is a gap 160 miles wide between Japan’s Miyako and Okinawa islands. The strait provides the crucial gateway for China’s North and East Sea Fleets to access the wider Western Pacific.

Since coming into power in 2012, Chinese President Xi Jinping has ordered the PLA to enhance its real combat awareness through stepped up military exercises. The military appears to be heeding his edict.