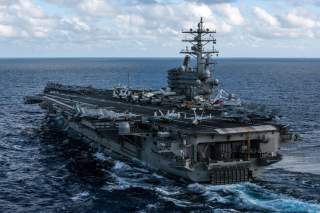 China is a rising power and it is only natural that it would seek to expand its areas of naval operations and political influence. However, arriving late to the geopolitical game, China does not want to play by the rules that have long been established but which Beijing did not help to formulate.

China seems to think that, because it was once the center of its world, more respect for its exalted status is needed. And Beijing wants to unilaterally change the rules for international engagement for its own benefit. But that doesn’t work and neither does being a maritime bully.

There are rising indications, however, that China intends to be just that. Beijing is likely thinking that it can get away with naval confrontations in nearby seas, due largely to a lack of effective counter responses to its current aggression in the East and South China Seas.

Beginning in 2010, Beijing upped its assertiveness in claiming ownership to much of the South China Sea, eventually putting forward a claim that the waters within a ‘Nine Dash Line’ map have been Chinese since historical times.

That sweeping claim intersects waters and territories claimed by Malaysia, the Philippines, Taiwan and Vietnam. Some readings of the broad map also put China in conflict with Indonesia over the gas-rich Natuna Sea.

Beijing has since been building military outposts on reefs and man-made islets in that area – pieces of land that are not recognized as sovereign territory by the United Nations Convention on the Law of the Sea (UNCLOS).

Some of those manufactured islets have recently been outfitted with landing strips capable of accommodating transport aircraft and jet fighters for even greater projection of power.

Moreover, China in recent years has not been averse to using force in asserting its claim to territory in the seas around it. In its dispute with Japan over the Diaoyu Islands (to China) – the Senkaku Islands (to Japan) – in the East China Sea, Beijing has rammed one Japanese vessel.

In a confrontation with Vietnam, China sunk a Vietnamese fishing boat. Beijing also threatened to use force against Philippine vessels in a 2012 standoff it won in seizing control of the fisheries rich Scarborough Shoal.

In December 2016, during the final days of US President Barack Obama’s administration and in an act possibly aimed at assessing then President-elect Donald Trump, China snatched a US Navy undersea drone just 50 miles from Subic Bay in the Philippine in an outrageously bold act.

The legal ramifications of this occurring on the high seas and whether UNCLOS applies have yet to be sorted out. What is clear, however, is that China’s seizure of the US drone went unpunished, as Washington offered no response other than a weak diplomatic protest.

Five weeks after taking office, Trump was powerless to react beyond casually opining that China could keep the drone. The likely conclusion that Beijing drew from the incident was that Washington is weak and that with all his bluster about withdrawing from engagement with the world, Trump would likely not pursue the matter further once in power.

Beyond the South China Sea

Interestingly, just as the Quad – Australia, India, Japan, and the US – alliance is girding up to challenge China with Freedom of Navigation Operations (FONOP) sailings in the South China Sea, China has extended its focus to the Indian Ocean through patrols in waters close to the Maldives.

The only safe east-west passage through the area is at the southern end of this shallow seas nation in the Indian Ocean.

Beijing fears being hemmed in by Washington and its allies, and it is through these waters leading to the Straits of Malacca chokepoint that China’s energy supplies from the Middle East pass.

China clearly worries that Sea Lines of Communications (SLOC) could be interdicted with a subsequent loss of greatly needed energy. And Beijing fully intends to keep those SLOCs open by controlling waters contiguous to seafaring bottlenecks.

Since Washington did nothing in response to the 2016 China drone heist, and despite American statements that it intends to ramp up FONOPs in the South China Sea, China seems to be confidently expanding its naval reach.

Besides intending to control the eastern approach to the Straits of Malacca by claiming much of the South China Sea, Beijing is now gearing up to dominate the western approach in the Indian Ocean to command SLOCs there as well.

It thus seems likely that China will force a naval confrontation with the US or one of its allies in the near future. If Beijing does militarily challenge Washington in the South China Sea, how will the US and its emerging Quad alliance react? What if the challenge occurs instead or simultaneously in the Indian Ocean?

It will be interesting, to understate the escalating situation, to see how China plays on any belief that America’s lack of a meaningful response over the 2016 drone incident shows the US is a paper tiger in the region.

If Washington backs off or otherwise acquiesces during any naval clash with Beijing, the remaining members of the Quad will likely fold as well. China would then have won nearly all of the Asian waters it needs for controlling vital SLOCs.

Is the rest of the world prepared to live with that?