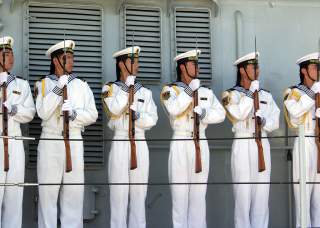 The South China Sea division of China’s State Oceanic Administration reported recently that the ship spent about three weeks patrolling islands claimed by Beijing to “protect China’s maritime rights.” The recent South China Sea tour was the CCG 3901 cutter’s first official patrol since it was commissioned into the coast guard.

CCG 3901, constructed in Shanghai’s Jiangnan Shipyard, is the sister ship to CCG 2901, which has reportedly been patrolling in the East China Sea since 2015.

“China prefers using its Coast Guard as the primary enforcer of its maritime claims,” the Pentagon’s Office of Naval Intelligence said in a past report, according to the Diplomat. China’s fleet of coast guard vessels is huge, with an estimated 220 ships.

While China is developing its naval capabilities, when it comes to the contested South China Sea, China relies heavily on its coast guard and maritime militia forces to carry out “gray zone aggression” against other claimants and, in some cases, the Chinese Navy gray hulls are more likely to cause the situation to escalate than some of the other vessels.

CCG 3901 outclasses the patrol vessels of other claimant states.

Of the 46 incidents that occurred in the South China Sea, the Chinese coast guard was involved in 72 percent. The size of the China Coast Guard has expanded rapidly in recent years. Since 2012, China has commissioned over one hundred ships into the coast guard.

This originally appeared at the Daily Caller News Foundation here.