China Is Setting Up Its First Military Base in Africa 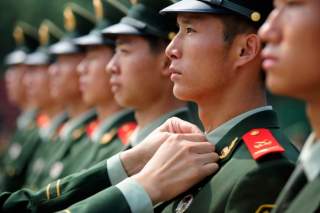 The People’s Republic of China is setting up its first military base in Africa as it continues its evolution into a global superpower. Beijing has signed a ten-year leasing agreement with Djibouti to build a logistical hub in that nation, which is located in the Horn of Africa.

“They are going to build a base in Djibouti, so that will be their first military location in Africa," U.S. Army Gen. David Rodriguez, commander of U.S. Africa Command, recently told defense reporters according to The Hill’s Kristina Wong.

It was only a matter of time before China set up overseas bases in the region. Beijing has enormous economic interests in the region that it needs to protect. China has set up deals to supply its growing economy—which even as it slows down is expanding at close to seven percent per annum—with raw materials.

According to the Economist, China is the African continent’s biggest trading partner with trade worth more than $160 billion per year. Over the past decade, more than a million Chinese laborers and merchants have move to Africa to work. Essentially, Africa ships raw material to China, which is then exported back as finished products.

China has somewhat of an advantage in competing for business in Africa because it does not have any intention or desire to impose its values on the locals or their governments. As such Chinese investments don’t come with any strings attached in terms of human rights or governance. But there has been some backlash from African civil society groups and even some African leaders. Indeed, Lamido Sanusi—Nigeria’s former central bank governor—told the Economist that Africa is opening itself up to a “new form of imperialism.”

Beijing is apparently trying to address the criticism according to the Mail & Guardian—  a South African paper. In this year’s Forum on China-Africa Cooperation (FOCAC) China is expected to start offering more access to capital for local African companies. Indeed, the Chinese Export-Import Bank extended $62.7 billion in loans to African countries from 2001 to 2010, according to the paper. The Chinese are also focusing more efforts on publicizing their efforts to create jobs for local Africans. It’s also making more of an effort to comply with local regulations.

The Chinese public relations offensive combined with its new base means that Beijing is in Africa for the long haul. Going forward in the years to come, Beijing could edge out Western influence in the region and secure access to the continent’s vast mineral resources for itself.