China Strikes Back in the South China Sea (ADIZ Style) 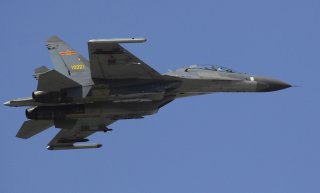 China’s People’s Liberation Army Navy (PLAN) flew armed Shengyang J-11 Flankers over the disputed Spratly Islands in the South China Sea on Friday. The aircraft were apparently taking part in a live-fire exercise in the region.

The PLAN released photos of the aircraft on its official website on Saturday but did not elaborate on where those fighters were operating from. The Chinese sorties appear to be in direct response to an earlier passage by the U.S. Navy destroyer USS Lassen near Subi Reef through waters claimed by Beijing.

The Chinese J-11s appear to have been fairly lightly armed. In the photos, the jets are shown to be carrying a pair of PL-12 medium range active radar-guided missiles—which are comparable to the U.S.-made AIM-120 AMRAAM—and a pair of PL-8 infrared homing missiles. The PL-8 is thought to have been derived from the Israeli Python-3 dogfighting missile.

The South China Morning Post reported that the jets probably took of from Woody Island citing retired Chinese general Xu Guangyu. Xu told the Chinese daily that he believed the island must have been the launching point because it is the only PLA base in the region that has operational runways. Xu also reiterated that Beijing intended the exercises to send a message.

“It's a signal China sent to the U.S. that it is serious about its claims,” Xu told the SCMP. “This is the minimum level of response China should have, or it will fail the expectation of its people.”

Xinhua, the official state-run Chinese new agency, downplayed the reports of the exercise. A spokesman for the People’s Liberation Army Air Force (PLAAF) said that the Guangzhou Military Area Command Air Force held an exercise that involved fighters, bombers, early warning aircraft, reconnaissance aircraft and helicopters from both the air force and navy, but said little else.

“Organizing drills is a common practice for all countries' militaries,” Shen Jinke, spokesperson for the People's Liberation Army Air Force (PLAAF) told Xinhua. “The Chinese army holds a series of regular exercises every year with the goal to improve real combat capabilities to cope with various security threats and safeguard national sovereignty and security.”

Nonetheless, the drills could be part of a larger Chinese move to bolster their territorial claims in the South China Sea. Operating the J-11—which is a potent air superiority fighter that is roughly evenly matched with the U.S. Air Force’s F-15C—out of Woody Island could be a precursor to China making an attempt to enforce a future Air Defense Identification Zone over South China Sea.

Once China has built up enough infrastructure on its island bases there is no reason that J-11s or another type of fighter or bomber couldn’t be stationed on those islands permanently. Indeed, once China’s network of bases is complete, it could project its air power out across the region. The drawback, of course, is that the bases are vulnerable to attack—particularly if it came to a conflict with the United States.

But these exercises are probably only the first step. Beijing will probably take further actions in the coming weeks to reinforces its claims in the region.