China Tests Its Most Dangerous Nuclear Weapon of All Time 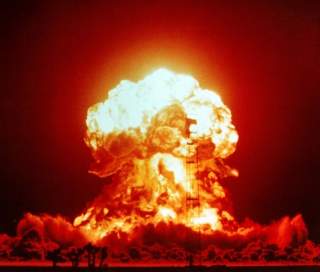 This week, Bill Gertz reported that earlier this month, China conducted the fourth flight test of its DF-41 road-mobile ICBM.

“The DF-41, with a range of between 6,835 miles and 7,456 miles, is viewed by the Pentagon as Beijing’s most potent nuclear missile and one of several new long-range missiles in development or being deployed,” Gertz reports.

As I’ve noted before, China’s acquisition of a MIRVed capability is one of the most dangerous nuclear weapons developments that no one is talking about.

MIRVed missiles carry payloads of several nuclear warheads each capable of being directed at a different set of targets. They are considered extremely destabilizing to the strategic balance primarily because they place a premium on striking first and create a “use em or lose em” nuclear mentality.

Along with being less vulnerable to anti-ballistic missile systems, this is true for two primary reasons. First, and most obviously, a single MIRVed missile can be used to eliminate numerous enemy nuclear sites simultaneously. Thus, theoretically at least, only a small portion of an adversary’s missile force would be necessary to completely eliminate one’s strategic deterrent. Secondly, MIRVed missiles enable countries to use cross-targeting techniques of employing two or more missiles against a single target, which increases the kill probability.

In other words, MIRVs are extremely destabilizing because they make adversary’s nuclear arsenals vulnerable to being wiped out in a surprise first strike. In the case of China, Beijing’s acquisition of a MIRVed capability is likely to force India to greatly increase the size of its nuclear arsenal, as well as force it to disperse its nuclear weapons across a greater sway of land to prevent China from being able to conduct a successful decapitation strike. Such a development in Delhi would upset the Indo-Pakistani nuclear balance, likely prompting Islamabad to take corresponding actions of its own.

China’s acquisition of a MIRVed capability is also likely to upset the strategic balance with Russia. As Moscow’s conventional military capabilities have eroded since the fall of the Soviet Union, Russia has leaned more heavily on nuclear weapons for its national defense. It therefore seeks to maintain a clear nuclear advantage over potential adversaries like China. Beijing’s acquisition of MIRVed missiles threatens to erode this advantage.

As Gertz’s notes, the U.S. intelligence community believes that the DF-41 will ultimately be able to carry up to 10 nuclear warheads. Such a development would likely force China to increase the size of its nuclear arsenal. To date, China and India (as well as the world’s other nuclear powers) have maintained relatively small nuclear arsenals compared with Russia and the United States.

The introduction of MIRVed technologies into the Asian nuclear balance may render this no longer true. For this reason— along with its long-range and solid fuel—the DF-41 is the most dangerous nuclear weapon in China’s arsenal.