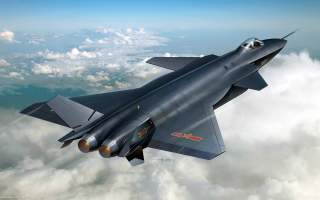 Beijing has again warned that it could send its J-20 stealth fighters for patrols close to, or above, the self-ruling island of Taiwan, and there is little Taipei could do about it.

The message was delivered this weekend by a military scholar with the China National Defense University during a China Central Television program about Taiwan.

The program said that combats and dogfights over the sea were a key focus of China’s military deployment, and that the twin-engine, all-weather, fifth-generation aircraft was primarily designed to pierce through a foe’s air defense identification zone and launch either reconnaissance or assault mission, or both, and that the “antiquated” F-16s and Mirage 2000s, still the backbone of Taiwan’s air defense, could hardly take on the squadron of Chinese warplanes.

The expert also said the Taiwanese military knew little about the J-20 and what it feared most was “precision strikes on the leadership or key targets” by the state-of-the-art jets on strength of their stealth, supersonic and maneuvering capabilities.

“J-20s can come and go at will above Taiwan,” the military researcher said.

It comes three months after the fighter jet was deployed to combat units of the Chinese military.

Still, manufacturing problems with the J-20, especially with its engines, mean the air force does not have adequate deterrence.