China vs. America: The "Freedom of Navigation" Debate 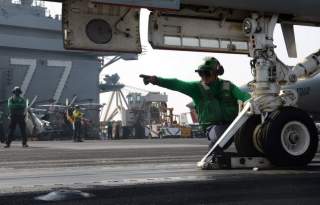 Comments by China’s Foreign Minister Wang Yi at the ASEAN Foreign Ministers Meeting recently highlighted the futility of the US-China dialogue over the freedom of navigation. In remarks to the press, Wang challenged Washington’s call for unhindered navigation of the high seas by arguing that the ‘current situation of the South China Sea is generally stable, and the freedom of navigation there has never seen any problems.’ The circular nature of this debate makes it clear that support for the US by third parties, such as Europe, will be necessary to break the logjam and reinforce a principle that Europe also relies on for its prosperity and security.

What was not apparent in Wang’s remarks is that the dispute between the US and China over the freedom of navigation is not about commercial ships, but military ones. According to Beijing’s interpretation of the UN Convention on the Law of the Sea (UNCLOS), military activities within a country’s Exclusive Economic Zone (EEZ) – which extends 200 nautical miles seaward from a state’s coastline – are banned. Washington argues that this is a distorted understanding of the law, and is supported in this view by the majority of states worldwide. Only about two-dozen countries openly agree with China’s interpretation.

There are many facets of China’s disputes with the United States over the South China Sea, but none generates more rancor than the question of military activities within an EEZ. This dispute has been the source of most US-China flashpoints in the region, including China’s harassment of the surveillance ship USS Impeccable in 2009 and the near-collision of a Chinese vessel with the guided missile cruiser USS Cowpens earlier this year. Following China’s announcement of an Air Defense Identification Zone over the East China Sea in 2013, it now appears that Beijing is seeking to exert sovereign control over the skies as well, and given China’s tendency toward harassment and coercion, mid-air confrontations with the US cannot be ruled out.

Yet while the US has defended its right to conduct military activities during recent crises, Washington is coy about raising the issue on a routine basis, favouring instead a vaguer call for ‘freedom of navigation.’ This could be due to a lack of support in the region for the US position. Countries such as Vietnam, the Philippines, Thailand, India, and Japan have all expressed reservations over the rights of foreign military vessels to operate in their EEZs. While these countries are all vigorous proponents of UNCLOS, and are skeptical of the legality of China’s historically based maritime claims, they are largely silent over the EEZ issue. This of course adds to the potency of Wang’s recent comments: they suggest that the US is an outlier in the region and has a policy that is not recognized by others.

Some countries believe that unfettered military activities in coastal waters may invite gunboat diplomacy or threaten their resource sovereignty. Others, such as Japan, are hedging directly against China. Amid doubts over the US ability to uphold the principle of the freedom of the high seas, Tokyo believes that the proscription of military activities within its EEZ may be one day come in useful in deterring intrusive activities off Japan’s own coastline.

The stakes in this dispute are clear. First, while the freedom of military navigation within EEZs has undoubtedly contributed to the US Navy’s global supremacy, it has also ensured the security of merchant traffic from the predations of state and nonstate actors, and underpinned the stability of world shipping lanes for centuries. The days of piracy, arbitrary taxation, and trade monopolies are long over – partly because navies around the world are free to conduct constabulary operations.

Second, for any law to be effective, it has to be clear. Freedom of the high seas should be, as the British saying goes, ‘exactly what it says on the tin.’ Exceptions to this rule muddy the waters over what is permissible and impermissible behavior. To paraphrase Thomas Schelling, theoretically, limits can be set on the freedom of navigation, but only on terms that are qualitatively distinct from the alternatives. ‘Freedom of navigation’ is clear and easy to understand. ‘Freedom of navigation under some circumstances’ is more problematic, and leaves ships open to selective enforcement of the law by the coastal state.

Third, freedom of the high seas is important in achieving stability among major powers. While the EEZ question has led to spats in the past, in general, the regime has fostered predictability, knowledge of one’s adversaries and awareness of conflict ‘red lines.’ Throughout most of the Cold War, the US and Soviet Union conducted maritime surveillance operations in each other’s EEZs and while these operations were never welcomed, they were tolerated as a part of an open global system. This attitude explains why the US accepted a Chinese spy ship shadowing the RIMPAC exercises last month, and why Washington is disappointed that Beijing is not returning the courtesy.

What should Europe do?

As the world’s largest economy, Europe has benefited from freedom of the high seas as much as the United States, and it is within its interests to defend it. The continentalist vision of maritime security, in which states can dominate the sea in the same way they do the land, would not only put an end to uninterrupted maritime traffic, but also see the extension of territorial disputes to the sea, where strong states would carve out their spheres of interest at the expense of the weak.

The US can achieve any number of its security objectives in East Asia through the commitment of military hardware, diplomatic effort, and economic resources. Yet it cannot shape global norms alone. Freedom of the high seas is a norm that grew out of international recognition, not the efforts of one country. If it is to be sustained, it must enjoy similar levels of support. This is a role that likeminded partners such as Europe should play.

Europe could assist in a number of areas. It should invite emerging powers such as China and India to take a greater stake in ensuring security of the maritime commons. This means continuing to conduct joint operations in counter piracy, disaster relief, and civilian evacuation. It would also mean accepting China and other big regional players need powerful navies with expeditionary capabilities, but this is a price worth paying.

Second, Europe should seek to engage China in a discussion about its desire for a closed maritime system. China has historical reasons for this approach – some of which are fed by a contemporary sense of insecurity – but there is no proof that the current system is not working in Beijing’s interests, and lots of proof that it is. As one senior Chinese official made clear at the 2014 Shangri La Dialogue, as a global trading nation ‘freedom of navigation is important to China […] we are very much dependent on it.’ How would China cope in a system in which these benefits would continually be under threat?

Third, and most importantly, Europe must come out in open support for the freedom of military activities with EEZs. This would embolden Washington to state its position more clearly – force Beijing to do the same – and would reassure other countries in the region that the principle is being fought for and not forgotten. Europe is accustomed to feeling powerless in East Asia, but on this question its role could be vital.