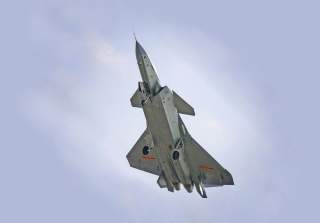 Over at the Washington Post, acclaimed columnist David Ignatius takes on the always tumultuous tides roiling the South China Sea. Ignatius points out the scope of Beijing’s defeat in the recent international court case brought by Manila, noting that while most that follow professionally this important part of the world were of the collective mind China would lose in some fashion, but no one (myself included) thought Beijing would lose so badly. Score one for the “rules-based international order.”

But it’s what happens next that is key. And to be clear, China will respond — and respond with a vengeance.

However, as Ignatius points out, at least for now, while Beijing has only stepped up the rhetoric and seems content to take selfies of its bombers over what could be its next island reclamation project in the South China Sea, the hotly contested Scarborough Shoal, China is not exactly in a position to respond — at least not right now. But come September, the timing could not be any better for what could be a big reaction that the world might not even notice.

G-20 Summit + A Presidential Election = A Time of Troubles for Asia:

Why the delayed response you ask? The timing for a forceful reaction, at least in a strategic sense, is far from ideal.

Remember, Beijing is set to host the G-20 Summit for the first time on September 4-5 in the city of Hangzhou. Always looking to enhance its status as a rising superpower as well as play the part that China is the ultimate partner nation and never one to start trouble, Beijing will follow a carefully well scripted playbook in the South China Sea — lots of fiery talk and signaling, but no escalatory steps for the time being. China would not want to risk having any drama at this prestigious gathering — beyond what could occur already when it comes to tensions in Asia. Why rock the boat and lose face? Now is simply not the time for a squabble. I would argue Beijing has every incentive to hold its fire until after the summit.

But the plot thickens from there, adding more reason to the argument that Beijing is holding back for the right time to respond. Why not take advantage of the daily media drama show that is the US Presidential election cycle and save any escalatory moves in the South China Sea so they simply get buried in the news cycle?

There could not be a better time to start trouble in the South China Sea, at a time when the United States—truly the only nation that could really deter Beijing from troublemaking — will be very much distracted in the business of selecting its next Commander-in-Chief. American as well as global media will be very much focused on the battles to come between Donald Trump and Hillary Clinton, whether it’s the upcoming presidential debates or the latest scandal of the day.

Even if China were to declare a South China Sea Air Defense Identification Zone (ADIZ) or start reclamation work at Scarborough Shoal, there is a good chance it would get much less coverage when the world is following the every tweet, speech and controversy over the race for the White House. So for China, that might just be the best time to pounce, when the world’s collective gaze is simply somewhere else.

We must also consider this: with a change of power looming in America and uncertainty over who will win as well as additional uncertainty over what their positions will be when it comes to Asia, Beijing might gamble now is the time to move. It might also feel it could get away with a little more drama now against an Obama administration that wants to leave its time in office not embroiled in a crisis in Asia. As they say, timing is everything.

A Time to Prepare: