China and Xi Jinping Sent a Message to Taiwan (but Did Taipei Hear It?) 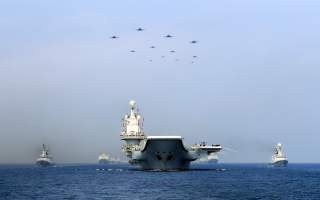 The People’s Liberation Army (PLA) wrapped up live-fire war games in the Taiwan Strait on Wednesday evening, aimed at sending a message to Taiwanese President Tsai Ing-wen – that the Chinese military is a force to be reckoned with if she pushes her pro-independence agenda.

Unfortunately, that message may have fallen on deaf ears as Tsai and the core members of her coterie were in the southern African country of Swaziland on a high-profile state visit, at a time when Beijing sought to demonstrate its fury and force with bombers, warships and big guns.

Observers say Beijing may find itself in an embarrassing position as its muscle-flexing was not seen first-hand by its intended audience.

The war games and drill came in the wake of the military fanfare and armada staged by the Chinese navy in the South China Sea over the previous week.

Tsai’s review of the island’s own navy one day after her mainland counterpart Xi Jinping exhorted PLA servicemen to defend the country, and her decision to go on with the visit despite the war games, could all be seen as a tacit retort in response to Beijing’s show of force.

Meanwhile Cui Tiankai, China’s ambassador to the United States, also hinted on Tuesday while addressing a function at Harvard University’s Fairbank Center for Chinese Studies that the drill would also convey a message to the US, while noting the exercise was scheduled a long time ago.

Citing Yu Keli, director of the Chinese Academy of Social Sciences’ Institute of Taiwan Studies, the Beijing-based Global Times admitted that the scale, duration and location of the drill had been given much thought beforehand in a bid to “deter but not to provoke,” and the drill was held in waters “close to the mainland shore.”

In Taipei, the Executive Yuan and Defense Ministry said there was a “small” exercise west of the middle line of the Taiwan Strait and Taiwan’s military did not heighten its alert level.

Taipei-based Eastern Broadcasting Co reported that the drill started at 8am on Wednesday morning along the coast off Fujian’s Quanzhou city and residents in the vicinity could hear intermittent artillery and missiles being fired.

Several military helicopters were also spotted while implementing night-vision and infrared-guided assaults. China Central Television said the drill was a live-firing exercise aimed at familiarizing soldiers in offshore combat during the day and night. The drill ended before midnight.