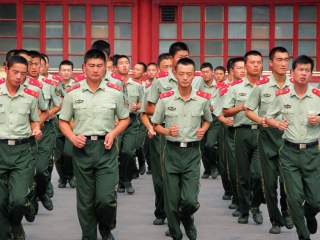 Over the course of the 2016 presidential debate, the argument that “America vastly outspends China” will likely be used to discount any possibility of an emerging China threat. In fact, it is an argument with considerable statistical appeal.

Consider that while China’s reported annual military expenditures are rapidly heading beyond $200 billion, the United States still spends more than three times that. Moreover, China’s military spending consumes only about 2 percent of its gross domestic product annually while the U.S. number is closer to 4 percent.

This “America outspends China” argument, must, however be tempered by several considerations. For starters, while America projects its force globally, China focuses regionally. Because of these different missions alone, any direct comparison of total military expenditures is highly misleading.

To put this in a weapons context, American taxpayers may foot the bill for ten active aircraft carriers. However, only several of these flattops are ever on patrol in the Asian theater at any one time.

As a further consideration, one dollar of Chinese defense spending goes much farther than a like U.S. dollar for at least two reasons: Chinese military personnel earn wages and benefits far less than their American counterparts. It is also demonstrably cheaper for China’s sweat shops to churn out weapons systems.

For all these reasons, it would be wrong to discount China’s military threat based on budget metrics alone. This is particularly true because the spending trend lines are likely to cross in China’s favor within a decade (or sooner) as China’s GDP growth continues to significantly outpace that of the United States.

In fact, once one looks at the longer term trends, it should not be reassuring at all that Beijing is devoting a much smaller fraction of its GDP to defense spending than Washington. Indeed, the economic ease with which China’s military is now rapidly expanding raises this sobering question:

Will China eventually be able to do to America what America did to Kaiser Germany in World War I, Nazi Germany and Imperial Japan in World War II? That is, will China be able to use its superior manufacturing might to overwhelm America on the battlefield?

In thinking historically about this strategic question, consider this: At the start of World War II, the combined economies of Nazi Germany and Imperial Japan were half the size of the United States. economy While America could field over 300,000 aircraft, Germany and Japan together had less than 200,000. The United States also had over 70,000 tanks compared to less than 45,000 for Germany.

So yes, while it is true that brave Americans at the frontlines ultimately won World War II, they were backed by heartland factories that could churn out weapons far faster than the enemy could destroy them—definitive proof of the winning ways of what the great Prussian strategist Carl von Clausewitz once referred to as “war by algebra.” Today, however, many of those factories that won World War II for America have been shuttered and offshored to Chengdu, Chongqing and Shenzhen.

As for the case of the Soviet Union, its fate as a fallen empire may be particularly apropos to the current trajectory of US-China military relations. Just consider this:

Back in the Cold War days of the 1980s, President Ronald Reagan adopted a highly aggressive “star wars” strategy to vanquish the Soviet Union based on his Strategic Defense Initiative. What Reagan had in mind, however, was not decisively defeating the Soviet Union on the battlefield. Rather, Reagan wanted to lure the Soviets into an expensive arms race in the hopes of breaking the “Evil Empire’s” economic bank in the process.

As U.S. defense expenditures dramatically rose during the 1980s, Reagan was repeatedly criticized for his hawkish gambit. However, in order to play such military spending poker with Reagan, the Soviets had to devote a far larger share of their GDP to defense—some analysts cite a figure as high as 40 percent!

It was this crushing defense burden, along with the collateral neglect of the other sectors of its economy, that ultimately bankrupted the Soviet Union and led to its economic surrender and breakup. In comparing this Soviet fall to China’s rise, Princeton professor Aaron Friedberg notes:

“China is a very different kind of military competitor than the Soviet Union was. The Soviet Union for ideological reasons cut itself off from the international trading system, cut itself off to a considerable degree from the global technological system, and tried to do everything on its own. . . . The Chinese are pursuing the inverse strategy. They are plugging themselves into the world economy and into the world technological and scientific systems as deeply as they possibly can. And that's a far smarter strategy and it's enabling them to move forward much more rapidly.”

The broader point here for the 2016 presidential debate and beyond is both simple and profound: While the United States still far outspends China on the military front, it seems to be only a matter of time until Clausewitz’s war by algebra tables will be turned. That’s why U.S. strategists must start planning today for a very different future—and a very different strategic approach to countering the power of what appears to be an increasingly aggressive and revisionist China.

Peter Navarro is a professor at the University of California-Irvine. He is the author of Crouching Tiger: What China’s Militarism Means for the World (Prometheus Books) and director of the companion Crouching Tiger documentary film series.