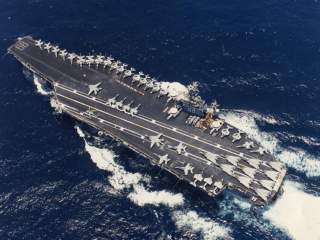 When Americans ponder the phrase “national security” they likely think of only one thing these days: the Islamic State. And considering the headlines, who can blame them? However, news out of China concerning a new generation of “carrier-killer” missiles—now sporting a 2,500 mile range—should remind Washington’s national security leaders of the long-term challenges America faces in the Pacific.

Countless ink has already been spilled when it comes to China’s first anti-ship ballistic missile (ASBM), the DF-21D, over the last six years or so. In September, Beijing unveiled a longer-range version of the weapon, the DF-26. While countless news articles marked the debut of the system, specific information on the new weapon was scarce. However, thanks to the sleuthing skills of U.S. Naval War College Professor Andrew Erickson, we now know a little more about the weapon—and its possible uses beyond the much discussed “killing” of carriers.

But first, a recap of how both the DF-21D and DF-26 work: The missile is launched from a mobile truck-mounted launcher into the atmosphere, with over-the-horizon radar, satellite tracking and possibly unmanned aerial vehicles providing guidance. It also incorporates a maneuverable warhead (MaRV) to help find its target—and defeat an adversary's missile defenses. Such a device could be instrumental in striking a vessel in the open ocean or denying access to a potential opponent in transiting to a conflict zone (think Taiwan or in the East and South China Seas).

So now that we know how the weapon works, the next set of questions are obvious: When would Beijing use it? What is the overall strategy for its use in a potential conflict? And what are its capabilities? This is where Andrew Erickson’s discovery comes in: he has uncovered the only in-depth article that gives at least some hard information concerning the weapon. While you can read the whole article here in Mandarin, written by Wang Changqin and Fang Guangming in China Youth Daily, here are five key points from the article worth knowing (the translation was also discovered by Dr. Erickson):

Point #2 - It Could Help Increases the Size of China’s Nuclear Arsenal in a Crisis.

“Given that China has only a limited number of nuclear weapons, and as a medium range ballistic missile, by changing to a nuclear warhead at the last minute it [the DF-26] can as needed form up a nuclear deterrent and nuclear counterattack capability linking long and short ranges and strategic and campaign roles.”

“Compared with silo launched and site launched ballistic missiles, another distinct characteristic of the DF-26 is that it can be launched on the move with no support. Land-based mobile launches in the past, whether with movement by rail or by road, all required a launch site prepared in advance. Although movement over a large area could be accomplished before or during a war, the destination of the move was always a prepared launch site. Because prepared launch sites are limited in number and easily exposed, destruction of a launch site could result in the bad situation of having missiles but not being able to launch them. Also, that sort of missile requires quite a lot of time to set up and get ready in a prepared launch site, which puts it at a great disadvantage against an encroaching enemy with strong mobility and a fast tempo of operation in its “combat chain.

"But the DF-26 does not rely on a site for mobile launching. It can move fast, and it has no strict demands for where it is launched. So that is helpful to movement of missile forces all over and in concealment, and it is helpful to the rapid deployment, rapid launch, and rapid displacement of combat elements. That means a boost to the missile force's survivability and to its attack ability. Against time-sensitive targets such as surface ships in particular, it [the DF-26] can attack at the last minute as soon as information on a ship's movement is acquired, meaning the ship cannot get away.”

Point #4 - Beijing wants to “use offense to assist defense” and is working towards “joint operations.”

“With the development of anti-identification, anti-interception, and highly integrated technology, the mobility, the ability to penetrate defenses, and the precision of strategic, campaign, and tactical missiles have all improved. By way of technical upgrades and merging into integrated, joint operations networked information systems, the DF-26's overall tactical and technical performance has continually improved to where it can be considered a prized possession which “uses offense to assist defense, meets challenges.”

Point #5 - Air-Sea Battle/JAM-GC is very much on China’s mind (maybe a reason they developed the DF-26?).

“Although the United States has repackaged “Air-Sea Integrated Battle” as a “Joint Concept for Access and Maneuver in the Global Commons” in order to balance the competing interests of the services, weaken the “hot war” flavor, lower the risk of “clashes,” and seek extra credit for “morality,” the overall message shows that its original concept and plan, “based on hot war,” “split the region,” and “disrupt stability,” is essentially unchanged. On the contrary, it has stepped up relevant preparations under the flag of “protecting regional security and peace” and “ensuring that the communal right of navigation is not changed.” For example, the Pentagon is making adjustments which will have 60% of its naval forces, including aircraft carriers, nuclear submarines, cruisers, destroyers, and coastal warships deployed in the Asia-Pacific region, and bring together sea-based, air-based, and space-based forces as “joint strike task forces.” It is using political coercion, economic enticement, and diplomatic pressure to consolidate its existing military alliances, and it is using military aid and joint exercises as bribes to get certain countries to become quasi-members of a military alliance.”