China's AIIB Bank: Part of a Much Bigger Master Plan 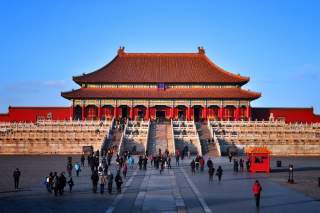 In his latest book Henry Kissinger anticipated China’s initiative to create the first new international organization of the 21st century. He didn’t foresee the Asian Infrastructure Investment Bank (AIIB) as such, but argued that as China continued to increase its global economic weight, it would inevitably seek its security, in part, by building international organizations in which it sat at the center. And that this would rightly or wrongly be seen as a challenge to the post-World War II US-centric international architecture.

China and other major developing economies have long expressed their dissatisfaction with US and European dominated international institutions created at the end of WWII. China’s efforts to increase its contributions and hence voting power in the IMF, for instance, have been stalled for years in the US Congress. The reservation of the top job in each of the World Bank and the IMF for citizens of the US and EU, respectively, is offensive. The deal between the two that has stuck for over sixty years smacks of a global Tammany Hall racket.

That China would build its own international bodies, and will continue to do so, shouldn’t be a surprise. In response mainly to increasing US presence in Central Asia—especially after the American’s gained permission from Uzbekistan to base air force assets there for the Afghanistan campaign—China created the Shanghai Cooperation Organization (SCO). Since its inception in 2007, it has expanded its membership and increased its activities, including regular heads of state meetings and joint military exercises.

The SCO is a multilateral organization that achieves three important strategic objectives for China: bringing Russia into a regional security forum that China leads; increasing China’s influence in Central Asia; and providing something of a bulwark against further US encroachment in Central Asia.

China also initiated the BRICs Bank in 2012. The BRICS (Brazil, Russia, India, and China) had little in common at the time, other than an easily remembered label.  China was most unlike its partners. Apart from its authoritarian political system, China has nearly $US4 trillion in foreign reserves and only a tiny amount of foreign currency denominated debt. China doesn’t have to fear capital flight in the event of an end to US quantitative easing when interest rates would start to rise. It’s likely that we may not hear much more of the BRICS Bank, especially now that the AIIB has been established.

In contrast the AIIB plays to all of China’s strengths. Over the past two decades, Chinese construction companies have demonstrated remarkable capacity to build infrastructure, be it power stations, expressways, ports or high-speed trains. To some extent, China’s infrastructure is becoming built out and Beijing is looking increasingly to exporting this capacity. On straight commercial grounds, China’s construction companies would be well positioned to grab the lion’s share of the bank’s funded business. But as China has founded the Bank and contributed the bulk of its capital, this is guaranteed.

Early proposals suggest that the AIIB’s initial capitalization might be in the order of US$100 billion, with China contributing about half. More recently, this seems to have been wound back to around $50 billion, with countries only required to contribute a small portion of their overall commitments, including China. China will still be the biggest contributor, but its approach is likely to be more measured than originally suggested, and as such will still carry the most weight in the new organization.

China also wants to recycle its foreign exchange reserve holdings and to reduce the share held in US treasury notes. Its experience in direct investment in major resource projects offshore has also been mixed at best with some investments resulting in massive losses. Increasing the use of the Renminbi for both international trade and capital transactions is also a high priority for the Chinese government, although the RMB’s status as reserve currency alongside the US dollar is a long way off.

The Bank’s founding coincides with an important change in China’s foreign policy under Xi Jinping. Since the late 1970s, China’s foreign policy has been governed by Deng Xiaoping’s maxim of “hide your light, bide your time.” Foreign policy had one principal objective beyond China’s security and that was to support China’s economic development. Although China had begun to take a leadership role in international institution building and to adopt a more assertive policy under Xi’s predecessor, Hu Jintao, Xi’s incumbency marks a break with Deng’s approach and the adoption of a more muscular foreign policy. This can be seen in the South China Sea, in the Senkaku/Diaoyu Islands dispute with Japan, and in a number of initiatives from institution building to agreements with the US on greenhouse gas emissions controls.

The AIIB also fits well with Xi Jinping’s far-reaching, ambitious New Silk Road initiative. As is standard in China, the articulation of policy often follows what has already been put in practice. In this case, Beijing has been building pipelines across Central Asia and Myanmar, train lines from Chongqing to Duisburg in Germany, and road links into Pakistan and a new port near Karachi for years.

These massive infrastructure projects all have at their heart a single geopolitical, strategic objective for Beijing. Throughout its entire history, China has been largely self-sufficient in natural resources and energy. But since its economy began to grow rapidly in the mid-1990s, it has found itself increasingly dependent on international markets for the resources and energy it needs to sustain growth.

And nearly all of these imports must go through the Straits of Malacca.  China’s at least 20 to 30 years away from being capable of challenging the US militarily in the Straits. For strategic planners in Beijing this is a major vulnerability.  The New Silk Road is therefore intended to give Beijing strategic options, and the AIIB is a means to pay for it.

China could have tried to achieve this solely through bilateral investments and loans. Instead, it has decided to bind itself in part in the rules of an international organization. This is already contentious in China as some are arguing that it shouldn’t constrain itself in this way, but should instead act unilaterally. Regardless, the leadership has decided that a multilateral institution will give greater legitimacy to its strategic objectives.

Inevitably the Asia–Pacific is being reshaped by China’s emergence as the dominant economic power.  Over the past thirty years, Australia has understood and responded creatively to changes in the region. APEC, for instance, was visionary in its anticipation of future regional developments.

It’s difficult then to understand the policy confusion in Canberra over the AIIB. In the end, Australia has managed to achieve the worst of all possible results. We have lost early mover advantage to influence and shape the institution, especially its governance, and we’ve not supported an ally who lobbied against the AIIB’s creation. We have joined the Bank not at the outset as invited to do so but at the tail end of a 57-country body, somewhere between Luxembourg and Norway. We’ll need a big diplomatic effort to regain some of the lost influence.

Those in the Obama administration who jumped on the phones to pressure advisers to our ministers breached one of the cardinal rules of diplomacy: don’t ask allies to make choices that may be against their interests.  Interests will ultimately prevail over friendship. The arch realist Kissinger would have understood this.

Geoff Raby served as Australia’s Ambassador to the People’s Republic of China from 2007 to 2011.