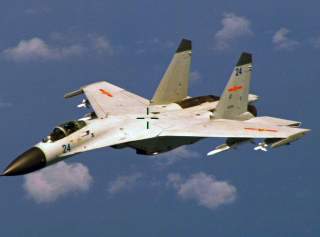 The Chinese air force conducted military drills around Taiwan on May 11, according to Focus Taiwan’s website.

It was the first time China’s Su-35 fighters and H-6K bombers flew through the channel that separates Taiwan from the Philippines. The aim of the drill could have been designed to intimidate Taiwan’s independent forces.

But Taiwan’s Air Force Command Headquarters issued a statement saying that the Chinese planes traveling on a northern route went through the Miyako Strait and then the Bashi channel between Taiwan and the Philippines before returning to base, while those on a southern route flew in the reverse direction back to the mainland.

Taiwan deployed its own Indigenous Defense Fighter and F-16 jets to monitor the drill, and pictures showing that the Taiwanese planes followed the movements of the Chinese aircraft have appeared on the Taiwan Air Force’s Facebook page.

The Chinese Air Force also put up a post on the drill of its official social media site quoting a spokesman saying that it will continue to circle Taiwan “as planned and is confident that it can defend China’s sovereignty and territorial integrity” — a direct reference to any attempt by Taiwan to declare its independence from the mainland.

Taiwan’s yearly live-fire drills to defend the island are expected to start on June 4. In late April, Chen Chung-chi. a spokesman for Taiwan’s Defense Ministry told reporters that the main goal of the drill is to “make any Chinese communist military mission to invade Taiwan fail.”

Although the DPP in principle wants Taiwan to be a truly independent country instead of where “the Republic of China” lives on after the communist victory on the mainland in 1949, president Tsai said during her election campaign that she was in favor of maintaining the status quo, preserving the progress made by previous governments in relations with the mainland, while preserving what she called “freedom and democracy” for Taiwan.

But more Chinese drills like the one last week can surely be expected as long as the DPP remains in power.

This article by Bertil Lintner originally appeared on Asia Times.