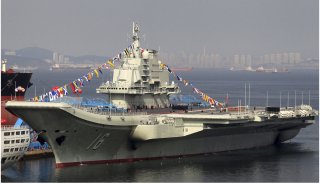 A recent op-ed in the Chinese state-run Global Times confirms what military analysts have been saying for years: China wants to turn its one aircraft carrier into a much larger force of multiple carriers that can be used to gain geostrategic advantage over America.

The op-ed, posted on December 25, also warns America what may come next for China's flattops:

"The Chinese fleet will cruise to the Eastern Pacific sooner or later. When China’s aircraft carrier fleet appears in offshore areas of the US one day, it will trigger intense thinking about maritime rules.

The distant sailing of the Chinese aircraft carrier fleet is not aimed at provoking the US nor at reshaping maritime strategic structure. But if the fleet is able to enter areas where the US has core interests, the situation when the US unilaterally imposes pressure on China will change.

China should speed up launching its new aircraft carriers so as to activate their combat.

Bold words indeed. But just how much of a threat are China's one and future carriers? Dave Majumdar, TNI's Defense Editor, took this question on back late in 2015. The full text below is reposted for your reading pleasure. Let the debate begin: