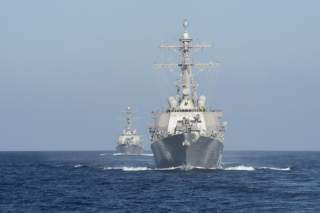 China’s reaction to the Permanent Court of Arbitration’s relatively harsh ruling against it on the South China Sea has been angry. The court upheld nearly all of the 15 points on which the Philippines approached the Court in 2013.China boycotted the proceedings, questioning the Court’s jurisdiction and publicly claiming historic rights to the South China Sea and its resources. The Court rejected this claim, concluding “there was no legal basis for China to claim historical rights to resources.”

In the absence of China exercising its right of defence, the Court was left with little alternative than to give an ex-partè ruling based on United Nations Convention of the Law of the Seas (UNCLOS), to which both China and the Philippines, but not the US, are signatories.

The Chinese Foreign Ministry in a defiant statement said “the award is invalid and has no binding force. China does not accept or recognise it.” Later the Chinese Assistant Foreign Minister reiterated China’s proclaimed right to declare an air defence identification zone (ADIZ) over the South China Sea. Whether or not China will implement an ADIZ, he said, depends upon the level of threat China faces.

Washington called upon countries bordering the South China Sea to avoid “provocative statements or actions.” In the Philippines, the change of presidency seems to have brought a new approach towards resolving the country’s differences with China. The Foreign Secretary welcomed the Court’s decision, urging “restraint and sobriety” among all concerned. Earlier, he had indicated that the Philippines would be ready to enter into bilateral negotiations with China after the judgment over joint exploration of resources in the South China Sea. Yet the Philippines still expects China to respect the ruling. And the ruling’s strong wording puts limits on how far the Philippines can roll back its claims without inviting a domestic backlash.

The South China Sea covers an area of nearly four million square kilometres. US$5 trillion or one-third of total commercial shipping passes through the Sea every year, making it one of the most important trade routes in the world. The South China Sea is a resource battleground, with an estimated 11 billion barrels of oil and 190 trillion cubic feet of natural gas as well as 12 per cent of the global fisheries catch.

The Chinese claim over the South China Sea, represented by the so-called nine dash line, predates communist rule in Beijing. China is now accused of building 3200 acres of territory in the South China Sea through reclamation and island building efforts.

Though the ruling pertains to the Philippines–China dispute, it will bolster similar claims by other states against China’s nine dash line. It will also increase pressure on China to seek a negotiated resolution to the overlapping claims. Any other course will be damaging to China’s international standing.

China believes that the increased US presence in the Asia-Pacific region — now institutionalised under the ‘Pivot to Asia’ policy, launched in 2012 — is meant to contain China’s rise. Many analysts believe that tensions in the South China Sea would be easier to resolve if the US prioritised regional cooperation over individual security partnerships. The United States’ active diplomacy encourages Japan, India and, to a certain extent, Australia to participate in ‘freedom of navigation’ operations in the South China Sea. This fuels discord in the region.

China’s increasing assertiveness in the South China Sea is a natural consequence of its growing economic power and its need to secure its front yard. It would be folly to underestimate China’s tenacity in pursuit of its national interests.

It is highly unlikely that China will relent on its position and cede control of the islands Beijing now occupies within its nine dash line, despite the ruling. But China does not want to be seen as a bully in the region, and will likely accommodate other’s positions in bilateral negotiations. China’s ambitions need a friendly neighbourhood. It must assure the ASEAN member-states that its intentions are benign.

As China is the major regional power, and has global ambitions, the onus is on it to take the lead in reducing tensions. This will mean working quietly behind the scenes to accommodate the interests of ASEAN member-states. After all, small economic concessions from China — the world’s largest economy in terms of real GDP — could mean big gains for the ASEAN countries. Together, Asia can rise peacefully.