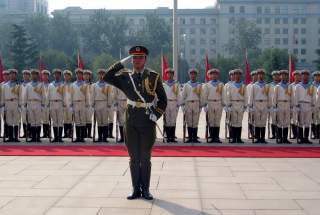 China on May 1 moved its giant indigenous oil rig, Hai Yang Shi You (HYSY) 981, southward in the South China Sea (SCS). The new location, only 120 miles from Vietnam's shore, is well within Vietnam's continental shelf and its Exclusive Economic Zone (EEZ). To support and protect this oil drilling structure, China dispatched over 80 vessels, a number that continues to rise. Foreign ships are warned to stay away from the rig for security and safety.

This move exhibits a new and dangerous escalation by China. Since 2007, Beijing has been increasingly assertive and aggressive in defending its territorial ambitions in the SCS. Chinese authorities attacked and captured foreign fishermen working traditional fishing zones in the area. Petroleum companies were pressured to withdraw from contracts with Southeast Asian claimants for fear of China's reprisal.

In 2009, Beijing officially stated its nine-dash line claim to over 80 percent of the SCS. This move was followed by the assertion in 2010 that the SCS was one of China's core interests. In 2012, China established Sansha City, the center of the local government of which was located in Woody Island, part of the Paracels and contested by Vietnam. A new garrison was formed and stationed on Woody Island. During this period, China's military capabilities have significantly improved, and it can now contest the U.S., both in the air and at sea, in the SCS.

China's newest escalation in the SCS represents a serious miscalculation by China's policy makers. They have made four strategic mistakes. First, the new development gives Vietnam no alternative but a bold and determined reaction. Article 56 of the United Nations Convention on the Law of the Sea in 1982 (UNCLOS) established that a coastal state has sovereign rights for the purpose of exploring and exploiting, conserving and managing the natural resources in its EEZ. Therefore, no interpretation of the UNCLOS can explain China's intention to drill an oil well within Vietnam's EEZ.

Vietnam, like other countries, does not clearly explain its position regarding territorial disputes in the SCS. This strategic ambiguity gives states space to negotiate and maneuver. However, China's newest move has crossed the line drawn by Vietnam's top leaders. Hanoi, therefore, responded furiously. Vietnamese Vice Prime Minister cum Minister of Foreign Affairs Pham Binh Minh called Chinese Councilor Yang Jiechi to protest China's move and asserted that Hanoi will "apply all necessary and suitable measures to defend its rights and legitimate interests" in the seas. Vietnamese marine police and fishery protection ships have been dispatched to stop deployment of the rig. China countered this move by sending over 80 vessels to protect its property. Collisions have occurred between ships of the two sides and more incidents are expected. This development has pushed Vietnam further from China and strengthened its security relations with other powers, such as the US. If Hanoi considers opening Cam Ranh Bay to a US naval presence, Washington would be remiss to turn down the opportunity. Indeed, Washington quickly commented on the incident. In a press statement May 8, State Department spokeswomen asserted that the sovereignty of the Paracel Islands is disputed and China's decision to introduce the oil rig, accompanied by numerous warships and authority vessels, in Vietnam's EEZ is provocative and raises tension.

Second, China's action violates the principles of the Declaration of Conduct of Parties in the SCS and deepens suspicions among regional countries about its true intention. In addition to Vietnam and the Philippines, Singapore and Malaysia are increasingly concerned about China's behavior in the region. Indonesia, which once maintained strict neutrality toward territorial disputes in the SCS, has reversed its position, and is contesting China's claim in the SCS because it challenges Jakarta's rights in the Natuna waters. In fact, Chinese armed authority vessels have encountered Indonesian authority ships several times in the last few years in waters claimed by Jakarta.

If China manages to drill oil in Vietnam's EEZ, on top of taking control of Scarborough Shoal from the Philippines in 2012, it will go further southward and clashes would be expected with Malaysia and Indonesia. Given Indonesia's role in ASEAN, Jakarta's recent change in position toward China is a setback for Beijing. The more assertive it is in disputes in the SCS, the more its international prestige is damaged. The achievements of China's "charm offensive" toward Southeast Asia in the 1990s could be erased by a rising tide of anti-Chinese nationalism in Southeast Asia. Collectively, on May 10, ASEAN Foreign Ministers, during part of the 24th ASEAN Summit in Myanmar, issued a stand-alone joint statement on the tension in the SCS, expressing their serious concerns over the incident and reaffirming the importance of peace, stability, and freedom of navigation in the SCS. This is the first time since 1995 ASEAN has issued a separate joint statement on a development in the SCS acknowledging threats to the regional peace, stability, and navigational safety in the SCS. This represents diplomatic backlash against China in Southeast Asia.

Third, China loses its pretext for military modernization. Beijing claims that its military modernization is defensive in nature, and it will not undermine regional security. During the period of rising tension in the SCS from 2007 to 2013, China often refrained from using naval forces. Instead, advanced paramilitary forces, such as China's Maritime Surveillance, were often deployed to serve its territorial ambitions. In the Scarborough Shoal stand-off between China and the Philippines in 2012, no PRC naval ship was sent to the site, and Chinese paramilitary forces and fishing vessels managed to push those from the Philippines out of the area. However, to protect China's giant oil rig in Vietnam's EEZ, Beijing has sent seven naval vessels to join 33 maritime surveillance ships and dozens of maritime police, transportation, and fishing ships. For the first time in the last few years, Chinese naval vessels have taken part in a direct dispute in the SCS. Other countries, therefore, have reasons to worry about the true intentions behind China's military modernization program.

Finally, China's move may destabilize regional security, creating a hurdle to Beijing's efforts to restructure its economy and sustain its growth. Beijing is facing severe domestic challenges, among them deterioration of the environment, an aging population, and separatist movements in Tibet and Xinjiang. In the last few years, terrorist attacks by separatist forces have occurred in major cities, threatening China's social stability. In addition, Chinese economic growth has shown signs of slowing. Chinese leaders need a stable international environment to concentrate resources on internal challenges. Its actions in the SCS, however, may destabilize regional security and undermine efforts to sustain growth.

China's movement of the HYSY 981 to drill inside Vietnam's EEZ is a strategic miscalculation. Beijing has, for the first time in the recent period of tension in the SCS, employed seven naval vessels to accompany this giant oil rig. It leaves Hanoi with no choice but to match the action with "all necessary measures" to protect its rights established in international law. Given China's recent history of assertiveness and aggressiveness in the SCS, other Southeast Asian littoral states are also alarmed by this move. Beijing's efforts to win Southeast Asian hearts and minds after the Cold War have been undermined, and its military modernization program is again being questioned.

In response to China's behavior, Southeast Asian countries are building asymmetrical capabilities to protect their sovereignty against Beijing. They also explicitly welcome the involvement of extra-regional powers, such as the US, Japan, and India, in the management of disputes in the SCS. In other words, China's aggressive behavior has facilitated and speeded up the US pivot toward East Asia, which Chinese top leaders do not want to see.

Being aggressive and causing regional instability doesn't help China realize its goals of economic growth and social development. The best way for China to rise to a status of a global power is to work out a new way to rise, one in which the core principle for its foreign relations is to cooperate for mutual benefit, respect legitimate rights of other countries, and settle disputes via peaceful negotiations. Running fast does not guarantee that it will arrive at its destination.

Ha Anh Tuan is a Ph.D. Candidate in Politics and International Relations at the University of New South Wales, Australia, and a Pacific Forum CSIS Young Leader. This article first appeared in CSIS: PACNET newsletter here.