China's Biggest Challenge: Being Number One 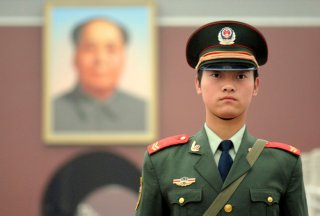 In 2014, China arrived as the economic Number One and Japan arrived as a ‘normal’ security player in Asia.

China confronts the many meanings and huge character test of being the biggest. Japan has just given Shinzo Abe a fresh mandate to remake Japan’s strategic role. That means four more years to grapple with Abe’s vision of what Japan must do to be true to itself, domestically and regionally (recall Tomasi’s great line: “Everything needs to change, so everything can stay the same.”) More than most nations, Japan is always about itself. But like the rest of Asia, Japan can’t resist being driven by China. It used to be U.S. pressure that got Japan to shift, now it’s Chinese competition.

Asia’s headline moments in 2014 included Modi’s election in India and Jokowi’s win in Indonesia. For the trends shaping Asia’s history, though, look no further than what the year meant for China and Japan.

First, China arriving as the economic Number One. After all the loud and long yabbering about what it’d mean when China passes the US as the biggest economy, the moment just zipped by. Leaving 2014 for 2015, China is the world’s biggest economy, with the U.S. stepping back to number two. Trend moments get no bigger. True, the measure is purchasing power parity. And the moment of the tectonic shift hides deep in the calculations of the International Comparison Program of the World Bank.

The instant that China got to Number One might be about now, as you’re reading this. If you don’t want to dive into the Excel spread sheet, follow the Nobel Prize economist Joseph Stiglitz on this benchmark moment for the Chinese Century. Enjoy Stiglitz’s report of how Chinese experts threatened to walk out of the World Bank technical discussions on the new numbers that showed China was on track to hit the top before the end of 2014.

Even China worries about the earthquake potential of the tectonic moment. Stiglitz writes that news of the glorious arrival was blacked out by the Great Cyberwall of China. Beijing’s fear is what this will do to a superpower ego across the Pacific: “China understands full well America’s psychological preoccupation with being Number One—and was deeply worried about what our reaction would be when we no longer were.”

Xi Jinping is thinking about what being Number One means, with his call for China to establish “big country diplomacy with Chinese characteristics.” Read those comments alongside the address Xi gave to the Australian Parliament with this version of the meaning of China as the biggest:

Others naturally wonder how the big guy will move and act, and they may be concerned that the big guy may push them around, stand in their way or even take up their place.

The big guy in 2014 delivered Australia a surprisingly broad free trade agreement, crowning a ten year negotiation. And the dance continues to get South Korea and Australia to sign up to China’s Asian Infrastructure Investment Bank. The Trade Minister, Andrew Robb (eight visits to China this year) is confident that the Abbott Government can get enough from Beijing to step beyond its “strategic” concerns to join China’s Bank:

If the governance provisions that we’ve put to them [China] which only replicate really what are in place for other similar bodies such as the World Bank and the Asia Development Bank, I am 100 percent certain that the Prime Minister will sign up.

Such a sign up would put Australia and South Korea inside China’s new institution, leaving Japan and the U.S. outside. Ah, the many problems of tectonic moments. Canberra is finding out what it means to be a “strategic partner” of China—the term agreed when the Gillard government got the deal for an annual leaders’ summit.

In the same way, Canberra is having to think what it means to be an ‘ally’ of Japan. The ally label bestowed by Tony Abbott embraces Abe’s vision of a normal Japan changing the peace constitution to do its strategic duty in Asia.

As Rod Lyon remarks, Abe and Abbot have brushed aside hesitant advisers to proclaim a “special relationship,” aiming for a level of strategic cooperation that no other Asian leader is likely to reach for. Abe’s new electoral mandate means the Abe-Abbott axis can go to higher places yet, transforming defense links.

Next year Australia will have to offer big thoughts on what all this means, in its fourth Defence White Paper in 15 years. The equipment decisions are agonizing and excruciating; the cost and commitment boggling in dollars and duration. But it’s the swift, swirling trends that drive Australia to have four goes at writing Defense’s New Testament.

clearly acknowledged that China’s rise constituted a major change in Australia’s circumstances, and that Australia needed to take a wider view of its national interests and expand its military capabilities. The possibility of war with China now influenced major force planning decisions for the first time since the Vietnam War.

Major change, indeed. And in 2014, China as Number One and Japan as Normal shoved the change even harder.

Graeme Dobell is the ASPI journalist fellow. This piece first appeared in ASPI’s The Strategist here.