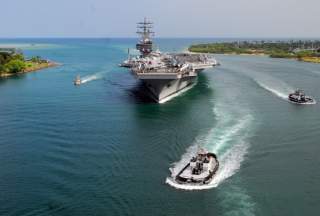 As the G-20 meeting convenes, the United States and the nation’s of the western Pacific must prepare to economically, diplomatically and militarily place China on notice that its aggressions in the region must be reversed and that international law in the form of The Hague Tribunal’s July ruling on the South China Sea must be upheld.

China, at present, must believe that the United States will not seriously contest its claims in the western Pacific. More than a month has passed since the ruling from the International Tribunal at The Hague was announced and China has watched closely for an enforcement mechanism to emerge.  “How will the U.S. led 'world' back up its laws?” they wondered, and then watched, and waited with a growing realization that the words of the Hague’s ruling would remain, in all likelihood just words.

Recent overhead imagery revealed new reinforced aircraft hangars and missile revetments on the three artificial features in the Spratlys, and sources in the region are suggesting that China is waiting until after the G-20 to initiate its military buildup on the Scarborough Shoals.   Within months, perhaps after the U.S. election but certainly before the end of the accommodating Obama administration in January, China will rapidly populate the islands with aircraft and missiles, and set about protecting its illegal territorial claims with military power.  Such actions will leave the United States and the nations of the region in a compromised military position and the current international system in tatters.

Economically the United States and the nations that surround the South China Sea have a number of options. Australia could place a rising import tariff on goods made by Chinese companies arriving in the Down Under. For every passing month that China does not vacate the artificial features, the tariff would rise.  The Philippines, who won the legal battle at The Hague, could sue in foreign courts to seize Chinese assets as back payment for “rent” of Philippine territory as well as pursue claims for environmental damages.  For example, the Philippines could ask a U.S. federal court to transfer ownership of the Waldorf-Astoria in New York City, a property owned by a Chinese state entity.  Such actions, to include sanctions, should be pursued for the purpose of disciplining China for its illegal seizure of reefs in violation of international law.

Diplomatically the nations in the western Pacific should seek to diminish China’s position in the world.  They should reject all entreaties from China to speak in a bi-lateral fashion, rebuffing the Chinese tradition of suzerain and supplicant.  Instead they should deal with China multilaterally.  Additionally, the regional powers and the United States should initiate steps to recognize the Republic of China on Taiwan as an independent nation, separate and distinct from Communist China. Possessing a population nearly the size of Australia’s and an economy ranked amongst the top of the world, Taiwan has more than earned a legitimate position in international institutions such as the United Nations.  These actions and others like them should be pursued for the purpose of correcting China and nullifying its illegitimate claim of territory in violation of international law.

Militarily the nations of the rim of the Pacific and the United States should increase joint exercises to include freedom of navigation operations while conducting normal military activities within 12 nautical miles of Subi, Mischief and Fiery Cross reefs as well as Scarborough Shoal.  In addition, U.S. naval commanders should invite Philippine, Taiwanese, Vietnamese, Australian, Singaporean and Laotian military units to embark on U.S. amphibious ships and conduct simulated landings in the South China Sea in preparation for possible future operations.  The United States should also increase its foreign military assistance to the region to a level analogous with Israel.  These military actions and others like them can and should be executed to entice China to surrender the foreign territories it illicitly captured in violation of international law.

Some might term these actions as bellicose and precursors for war, but such pronouncements ignore China’s original sin of altering the status quo by building the artificial features and setting the region on a course to conflict.  Such statements also overlook the fact that the modern liberal international order is fragile, and endures only through the consensual support of the global community.  The United States, its partners and allies must place China on notice that its actions will not stand and that The Hague Tribunal ruling must be obeyed.  No nation set out to humiliate China.  Every nation has acted with full sensitivity towards China’s “Century of Humiliation,” but Beijing has taken advantage of their neighbor’s kindness.  China must now either back down, returning to compliance with international norms, or accept the economic, diplomatic and military consequences it has earned.  As the G-20 meeting convenes, China must be made to understand that it is in a prison of its own making and it has the only key to unlock the door.  The decision to pursue peace or war rests completely with it.