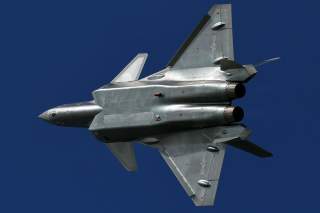 China appears to be making progress on a super-fast, stealthy, combat drone.

That’s at least one conclusion that can be drawn from a recently published photo that appears to show a full-scale mock up of China’s Dark Sword unmanned combat air vehicle (UCAV). The photo shows nearly twenty individuals— likely engineers at the Aviation Industry Corporation of China’s (AVIC)  Shenyang Aircraft Design Institute, which is designing the plane— standing in front of the model. If so, it is the first full-scale mock up to be seen in the public domain.

The existence of the Dark Sword drone dates at least as far back as a 2006 air show in China where concepts of the plane were first shown.

What is clear is that Dark Sword is not your grandfather’s type of drone.

Most UAVs to date have been built for high endurance, ISR missions. Even the drones that are armed have traditionally been used to provide blanket intelligence over long periods of time before engaging their targets. By all appearances, the Dark Sword seems to be designed to engage in dog fights with other jets or long-range strikes. It bears far more resemblance to planes like America’s F-22 and F-35 or China’s J-20 than a Predator drone.

As David Axe notes over at The Daily Beast, several features indicate that the Dark Sword is meant to be stealthy. For starters, its paint seems to be the same kind of radar-absorbing coating that is found on fifth-generation fighters like the F-35, F-22, and J-20. Axe also notes that it has “special engine air inlet that can reduce detectability on radar while still enabling supersonic flight.”

In specific, as Tyler Rogoway explains, this technology is called a Diverterless Supersonic Inlet (DSI). A DSI was originally developed by Lockheed Martin and tested on an F-16 in the late 1990s. Subsequently, it was incorporated into the F-35. China also stole the DSI technology and now uses it on all its modern jets. A DSI comes with a number of advantages, as Rogoway points out:

“A DSI allows for supersonic flight without the use of complex maneuvering ramps that slow air to subsonic speeds before it hits the engine face. It also removes boundary layer air from the aircraft's fuselage, providing the engine with stable and consistent airflow throughout the aircraft's flight envelope without the necessity of non-stealthy splitter plates and other structures. Finally, it provides for radar cross-section reduction in multiple ways.”

This includes the ability to fly at supersonic speeds without the use of afterburners that eliminate the plane’s stealth. This means that Dark Sword should be able to fly at speeds approaching Mac 2 while remaining stealthy. Among the other stealth elements of the Dark Sword UCAV is the use of saw-tooth edges, which also reduces the plane’s radar cross section.

A stealthy, fast, combat drone like the Dark Sword could be extremely useful for the People’s Liberation Army. The plane could either fly alongside manned-jets in an operation like an invasion or Taiwan, or it could fly ahead of its manned counterparts to collect intelligence or engage adversaries. As Rogoway points out, in the latter scenario the Dark Sword drones would be a powerful force multiplier for China’s numerous non-stealthy planes. It is also possible the UCAVs could be flown off China’s future aircraft carriers.

The full-scale mock-up notwithstanding, we do not know how close China really is to having operational stealthy combat drones. For instance, we cannot assume that the Dark Sword mock-up shown in the photo can even actually fly. What it does suggest is that China is continuing to invest heavily in acquiring this capability. This means that it will likely have this capability at some point in the future whether in the form of the Dark Sword or some other model. And, as David Axe points out, the U.S. has consistently underestimated how quickly China would make military advances. Therefore, China might have UCAVs of some variety sooner than we think.

What makes this reality particularly troubling is that the United States has not been pursuing this capability with much urgency. The U.S. Navy had been exploring acquiring such a capability in the form of carrier-based combat drones under the Unmanned Carrier Launched Airborne Surveillance and Strike (UCLASS) program. But after much debate it was decided that these UAVs should be designed for more mundane tasks like aerial refueling. There is undoubtedly some work being down in the classified realm. However, there is a real danger that the United States is falling behind China in what could be a critical capability. And, given the classified nature of America’s work, there’s no way for the public to really know.