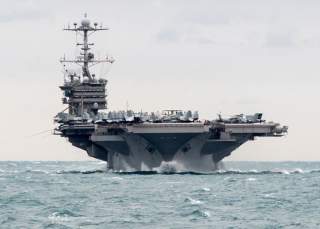 If you were trying to connect with your friendly neighborhood Asia defense geek last Friday around 2:30 pm EST you were likely greeted with voicemail, an unanswered text or silence on your preferred social media channel. The reason you were ignored: The Pentagon decided to call a press conference to announce the findings of its latest annual China military report. And while the report was as comprehensive as ever, it’s what was left out that is the real story — and the omission is a glaring one to say the least.

But before we get to that, let’s give credit where credit is due. The Pentagon, on most years (the 2014 report was almost universally panned as lacking any depth—but that is for another column), delivers a stellar overview of not only the rise of China’s military, detailing key pieces of hardware that policymakers and experts should be in the know on but also why Beijing is driving so hard towards developing a modern fighting force that in many areas is catching up or is passing Washington in key areas.

The report is comprehensive and filled with details and informational tidbits that are rarely all lumped together. The document also undertakes the arduous task of having to also speak to the challenges of the US-China strategic dilemma while highlighting areas of cooperation—not an easy thing to pull off in one unified narrative.

Speaking for myself, the report has always been a go to read and I would assign sections to new interns while serving as Executive Editor of The National Interest to ensure they had a clear understanding of China’s growing military power—something we published on quite frequently.

And yet, there is an obvious hole in the 2016 version of the report that leaves it incomplete. Over the last few months, there has been a flurry of articles detailing a new version of China’s anti-ship ballistic missile (ASBM), named the DF-26. This new variant of the widely successful Dong Feng ballistic missile family builds on the success of the DF-21D, many times referred to as Beijing’s “carrier-killer.”

The DF-26 sparked tremendous debate back in September of last year when the missile cruised down the boulevards of Beijing—labelled in English, just in case western defense audiences missed it—during a military parade celebrating the 70th anniversary of the end of World War II. An announcer for the parade described the missiles in Chinese as coming in a “Conventional-/Nuclear-capable formation. The DF-26 can perform medium-to-long-range precision attack on both land and large-to-medium-sized maritime targets. A new weapon for strategic deterrence.” But perhaps the biggest reason the missile made news: it has a reported maximum range of 2500 miles—something the US Navy has to take very seriously.

So what does the Pentagon’s new report tell us about the DF-26? Very little, at least when it comes to the anti-ship variant of the weapon—which I would argue could be a game changer when you consider its possible range. To be clear, there are several DF-26 non-ASBM mentions, noting that, “when fielded,” it “will be capable of conducting precision strikes against ground targets and contribute to strategic deterrence in the Asia-Pacific region” and “if it shares the same guidance capabilities, would give China its first nuclear precision strike capability against theater targets.” The report later strikes a similar note explaining, “this system is capable of conducting intermediate precision strikes against ground targets, which could include US bases on Guam.” All of major importance, but if US aircraft carriers and surface combatants are now under threat now from as far as 2500 miles away from the Chinese mainland, that is a huge concern. And yet, there is no direct mention of this possibility (see the below video at 42 minutes in for a glimpse of the missile).

In fact, if you dig a little deeper, there is what I would call a “sort of” mention of the DF-26 in ASBM format, but is very hard to find, and is in an indirect format to say the least:

“Intermediate-Range Ballistic Missiles (IRBMs) (3,000-5,500 km): The PLA is developing a nuclear and conventional road-mobile IRBM, which increases its capability for near-precision strike out to the “second island chain.” The PLAN also is improving its over-the-horizon (OTH) targeting capability with sky wave and surface wave over the horizon (OTH) radars, which can be used in conjunction with reconnaissance satellites to locate targets at great distances from China, (hereby supporting long-range precision strikes, including employment of ASBMs.”

Considering how this report, and many prior Pentagon reports, have discussed in varying levels of detail the DF-21D, why not some analysis of the DF-26 ASBM?

The easiest explanation I can think of is that the US military has very little information (beyond what is in open sources) on the system’s true ASBM capabilities. In fact, when discussed in non-ASBM areas, as noted above, the report itself refers to the missile with terminology such as “when fielded” and “is developing” but then uses terms like “this system is capable of conducting.”

While this is a little confusing, this could be a reflection of real debate inside the US military of how effective this weapon could be against fixed land targets and to a greater extent against a moving target at far away ranges. If this is the case, why feed a narrative that US carrier strike groups would now face volleys of advanced Chinese anti-ship ballistic missiles starting at the second-island chain if they did not have clear intelligence confirming such a disturbing fact?

From this perspective, you can see rather quickly why the Pentagon would want to get this right: combining a 2500 mile-range ASBM with the likely more reliable DF-21Ds (being operational for several years now) with a range of roughly 900 miles and various types of anti-ship cruise missiles being fired from land, air and sea in various types of salvos/saturation strikes—the US Navy is quickly facing an anti-access nightmare in the Asia-Pacific that is growing worse year by year.

In the past I have described the challenge of Chinese anti-ship missiles as a “great complicator” for the US military—but it would be sure nice to know what the defense gurus of the Pentagon thought of this latest weapon, even if it was a statement to the effect that they were still formulating an opinion. Let’s just hope we don’t have to wait until some random Friday late in the day next May to find out.

Harry J. Kazianis (@Grecianformula) is a Senior Fellow for Defense Policy at the Center for the National Interest and is now a Senior Editor at The National Interest. He is the author of a new monograph on China’s military modernization: The Tao of A2/AD. The views expressed in this article are his own.