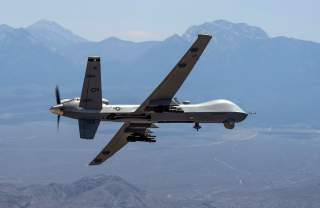 The video claims that the CH-4B drones have executed most of their attack and reconnaissance missions in northwest Iraq. Since their entry into operational service, they have performed no fewer than 260 air strikes against Islamic State targets, with a success rate close to 100 percent.

Iraq ordered its CH-4Bs from China in 2014, probably after the visit to Iraq by the Chinese foreign minister in February of that year. The CH-4 is inspired by the General Atomics MQ-1 Predator and is designed by China Aerospace Long March International.

The CH-4B version, as ordered by Iraq, can carry a payload of 761 pounds, compared to the CH-4A with its 254-pound payload. Weapons can include two AR-1/HJ-10 anti-tank guided missiles, Chinese equivalents of the Lockheed Martin AGM 114 Hellfire, and two FT-9 GPS-guided bombs.

The CH-4B has a ceiling of 23,000 feet, a cruise speed of up to 112 miles per hour, a maximum speed of 130 miles per hour, an endurance of 14 hours and an operating radius of 155 miles. The first batch was received on Jan. 23, 2015 and the first photographs — showing three vehicles — circulated that March.

Thereafter, the drones were integrated in the apparently newly-established 100th Squadron and carried out a number of reconnaissance missions from their base at Al Kut. In the autumn of 2015, some pilots said that the UAVs were attached to the 84th Attack Squadron, part of Iraqi army aviation, but the latest footage provided by Iraqi defense ministry show clearly Iraqi troops wearing the 100th Squadron patch.

On Oct. 10th, 2015, CH-4B serial number YI-801 made its first public flight during a visit to Al Kut by Iraqi defense minister Khaled Al Obeidi. The UAV was carrying two HJ-10s and fired one of these against a ground target southeast of Baghdad.

During this mission, the UAV remained within its radio control range of just 155 miles and did not employ a satellite relay. A Chinese operator was present in the control room during the flight, indicating that Iraq was not yet able to employ the UAVs autonomously. Four vehicles were noted. One on the runway, one on the apron and two others in hangars.

On Dec. 6th, 2015 a CH-4B from the 84th Attack Squadron conducted an air strike in Ramadi, destroying an artillery piece hidden in a factory. This gun was targeting Iraqi forces stationed at Palestine Bridge, northwest of the city.

A few days later, one of the Iraqi UAVs targeted a gathering of ISIS fighters to the west of the city of Ramadi, destroying one vehicle with an HG-10 missile. On Dec. 9, 2015, a CH-4B destroyed an explosives manufacturing plant in the area of Al Kiara. On Feb. 16th, 2016, another UAV destroyed an equipment depot.

On March 1, operations began with the aim of liberating Samarra Island. CH-4Bs neutralized car bombs west of the city. On May 23, 2016, an army CH-4B monitored ISIS activity in the city of Fallujah and used HJ-10 guided missiles to destroy a car carrying an IED.

The Chinese CH-4 was first seen at the Zhuhai airshow in 2012. In 2013 and 2014, Algeria evaluated the CH-4, but lost two of the type during testing flights at Tindouf and Ain Oussera air bases. The CH-4Bs were exported to Saudi Arabia and Egypt and were first spotted at Jizan Regional Airport on July 10, 2015, from which they performed mission over Yemen.

In September 2016, one of the type was shot down by Houthi air defenses. During IDEX 2017 – the International Defence Exhibition that takes place at Abu Dhabi in February — it was announced that Saudi Arabia has signed an agreement with ALIT to manufacture all types of CH UAVs in the kingdom.

But for now, the CH-4 is most famous for its role in Iraq’s campaign against ISIS.

This article by Arnaud Delalande originally appeared on War is Boring.