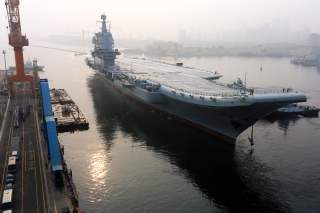 The first aircraft carrier made in China’s headed into open waters on Sunday morning for its first sea trial, away from prying eyes in the Bohai Sea, a gulf surrounded by Chinese territory.

The new carrier embarked on its maiden voyage after weeks of preparations as rumors spread about the vessel’s first sea trials.

State broadcaster China Central Television confirmed that the 55,000-ton carrier, which has not yet been christened and is only referred to as “Type 001A carrier,” was towed from its pier at the Dalian Shipyard in northeastern China’s Liaoning province at about 6:45am.

Footage aired by CCTV showed the carrier, which looks almost identical to the Soviet-built Liaoning with a ski-jump take-off ramp on its bow, cast off amid thick smog, a fireworks display and to the sound of the vessel’s full-throated horn.

It was escorted by several smaller military vessels en route to waters in the nearby Bohai Sea, previously cordoned off by the local maritime authority from Sunday to Friday.

Yahoo quoted sources as saying that the new carrier would likely be named after the eastern coastal province of Shandong, an agricultural and industrial powerhouse on the Bohai and Yellow seas.

The captain of the domestically-made carrier is Senior Colonel Lan Jun, a veteran who also served on a Type 053H3 frigate of the East Sea Fleet.

Unconfirmed posts that appeared on the online forums of the People’s Daily and People’s Liberation Army Daily on Monday morning said the carrier was now cruising in the center of the Bohai Sea, the innermost gulf surrounded by Chinese territory, so as to keep the ship away from the prying eyes of foreign media and militaries since Chinese experts had given a caveat beforehand that the initial sea trial may not be “smooth sailing.”

The weeks of delays since mid-April could also be an indication of possible mechanical glitches as well as circumspection on the part of the shipbuilder and the Chinese navy. The sea trial has already been held back twice since last month.

CCTV noted in a brief report that the engine, propulsion and navigation, communications, power supply and other peripheral systems onboard the indigenous carrier would be tested at sea for the first time, one year after it first took to the water at its official launch and three years after the start of construction.

Global Times also reported that the new carrier would likely be delivered to the navy “by the end of this year” with a swift, full commission of the ocean-going airbase “slated for 2020.”

“Weapon systems and carrier-based aircraft are unlikely to be part of the first sea trial. Combat capability tests will be carried out after the carrier is delivered to the navy … The builder needs about six months to finish its testing, which means [the PLA] can expect to receive the carrier by the end of this year,” the Beijing-based tabloid quoted a military observer as saying.

Looking from shore, it appears that a four-faced active phased array radar system has been mounted on the carrier’s bridge. Hongqi-10 surface-to-air missiles and Type 1130 close-in gatling guns, among others, were also spotted on both fringes of the deck.

However, the two carriers that the PLA has are still no match in size, range, speed or combat capabilities to the nuclear-powered elite class of the US Navy, which has 11 aircraft carriers, many of which are of the 100,000 ton super-carrier range.

China’s warships would enable it to “project its power and influence in its neighborhood,” said Steve Tsang, director of the China Institute at London’s School of Oriental and African Studies.

“With the Chinese carriers substantially inferior in capacity to the US super-carriers, the balance of forces between the two navies will only change marginally rather than substantially,” he told AFP.