China's Genius Strategy in the South China Sea: Keep Calm, and Build On 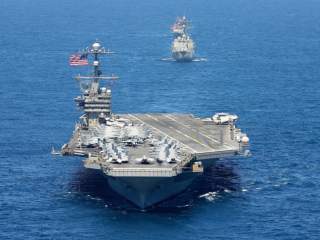 "We will fly, sail and operate wherever international law permits, and that includes flying over that airspace" is roughly what we hear over and over again when U.S. defense—and now President Obama—refer to American actions in the South China Sea. The challenge, of course, is that China might not care—and that’s a huge problem—and if they’re smart, they shouldn’t care. Call it the “Keep Calm, and Build on Doctrine.”

By now, at least in my humble opinion, a dangerous pattern has emerged that should have Washington and its allies quite worried when it comes to this important body of water that saw over $5 trillion of sea-borne trade pass through its shipping lanes—$1 trillion of which was U.S. goods. It goes a little something like this: the U.S. Navy conducts a FONOP or flies over newly built islands in the South China Sea in some public way, making sure it has on record that America will not stand for any attempts by China to challenge freedom of navigation in or control of international airspace above the South China Sea. However, as Dean Cheng recently pointed out, such FONOPs don’t “address the larger point that China seeks to establish new precedents, by building entire islands atop reefs and then claiming territorial sea and exclusive economic zones around them.”

Indeed, moving the above one step further, Beijing is taking advantage of a key flaw in U.S. strategy. As Washington defends the time-tested international principle of freedom of the seas and, in many respects, airspace—centuries old U.S. policy since the founding of the republic—the Obama Administration is not pushing back against China’s quest both to become the dominant power and to essentially take ownership of the South China Sea. While fighting for freedom of navigation might look like pushing back against Chinese coercion in the South China Sea to the untrained eye it is clearly not the same thing. Digging a little deeper, as Julian Ky noted earlier in the month, “the avowed legal purpose of these U.S. FONOPs is to win acquiescence for the U.S. (and majority) view of international law that innocent passage of military ships does not require prior permission,” not to directly challenge China’s goal of hegemony in the South China Sea. He goes on, correctly pointing out, “the sub silentio strategic goal of these FONOPs is to isolate China from its regional neighbors”—a worthy goal, but clearly not working if ASEAN states won’t even sign on to China being mentioned in a joint statement when President Obama hosted the group this week in California.

So, now that we have the backstory of this drama out of the way—and we know Washington is not actively trying to halt Chinese dominance in the South China Sea, just narrowly defend Freedom of Navigation—what, then, does China do when a FONOP occurs? Complain loudly. . . but carry on and build up.

And it's what is involved in that “carry on” that matters a great deal. Beijing, presses ahead with militarizing its newly built islands, testing aircraft off newly build runways, deploying more and more non-naval maritime assets, putting the finishing touches on new harbors while declaring loudly and proudly in various formats and ways that the South China Sea is Chinese territory—and its actions show it is serious about enforcing such claims. The recent deployment of the HQ-9 air-defense system is proof positive of such actions.

So what is America to do? In this case, what America should do—continue FONOP operations but quickly develop a strategy to ensure China pays a price for its coercive actions in South China—is what America will not and cannot do. Considering the challenge of ISIS, Russian moves in Syria and Ukraine, a Presidential election and now a budding war over the future of the Supreme Court there is clearly no political bandwidth left in the waning days of this administration to take on another foreign policy challenge—music to China’s ears. In fact, if Beijing was smart, the time to reinforce its claims is now, especially before a more assertive administration comes into office. In fact, that might be what we are already seeing in China’s recent behavior.

My prediction for the next few months: America keeps sailing, China keeps protesting—and Beijing builds on.

My prediction for one year from now: a Chinese Air Defense Identification Zone (ADIZ) in the South China Sea.