This Is China's Greatest Problem (A HINT: Its Not the South China Sea) 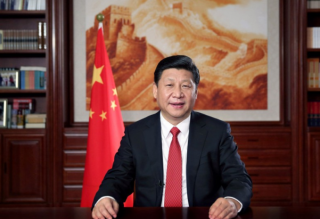 Xi and his allies come from the same cultural background as their adversaries. And Xi's associates, having risen to the top of the system by winning their share of power struggles, must be familiar with what is necessary to break into power: It is a matter of attempting to discredit the incumbent power and forming a coalition with enough momentum to seize key leadership positions. It is a tried-and-true method by which Xi's enemy, the now-disgraced Politburo member Bo Xilai, attempted to raise his own profile. Aware of precedent and expecting a showdown, Xi wants to block any potential enemies from using state media to their advantage. The deepening paranoia of China's leader suggests that real threats to Xi are developing in the sidelines.

Xi is clearly willing to go to great lengths to secure his control over the media, but his tightening grip on state outlets is only one facet of a much broader crackdown. Xi's ultimate goal is simple — in his own words, he demands "unflinching loyalty" from all parts of the party, state and military. But the many forms of resistance in China — not only from political elites and the press but from protesting workers laid off from China's heavy industries — all mean that Xi is well short of receiving absolute loyalty.

So where does resistance come from in Xi's China? In the case of the party elite, it comes from a dissatisfaction with both the loss of participation in the policy process and easy access to benefits that party membership once brought. With the press, it comes from unhappiness that the small degree of freedom journalists once had is being suppressed. From laid-off workers, it is the perception that the old economy that supported them is no longer functioning. In all cases, it is a perception that a system that once gave benefits (whether material or political) no longer delivers the goods. In short, lots of people feel that things in China just aren't as good as they used to be.

In 1971, Albert O. Hirschman wrote the essay Exit, Voice, and Loyalty, detailing the options that consumers (in the broadest sense) can take when faced with declining quality of services. They can exit — silently refuse to offer their business/participation and find other alternatives. They can resort to voice — whether organizing to collectively voice complaints or taking action to change the situation. Finally, there is loyalty, which Hirschman sees as an intervening variable that affects one's willingness to resort to either exit or voice; it is a third option in and of itself — to redouble one's devotion to the cause and hope things get better. Restricting any one of these options tends to force people to the others. For Xi, the best outcome is creating a system where exit and voice are removed, leaving loyalty as the sole remaining option.

In China today, the options for exiting the system are severely curtailed. Xi's regime has made it a priority to demonstrate that no place is beyond the reach of China's law enforcement and security services. In 2014, Beijing began two campaigns — known as Operation Foxhunt and Operation Skynet — to recover fugitives hiding abroad, as well as their financial assets. Such programs are only likely to intensify as China works to refine its ability to track down escapees and their money.

Once-vibrant communities of the Chinese diaspora across Southeast Asia, which served for centuries as safe havens for dissidents, exiles and fugitives, have been infiltrated by the Chinese secret police, leaving expatriates too scared to talk to one another for fear of informants. Beijing's security services have been increasingly aggressive in expanding the scope of their operations, both functionally and geographically. They have performed at least two renditions from Thailand that we know of. And, if sources are to be believed, they have also attempted the murder of at least one fugitive in the United States. When dissidents abroad are in fact beyond the reach of security services, reports show an increasing willingness to target family members on the mainland for prosecution.

Xi's government is also showing that nonparticipation, a classic form of exit in Eastern Bloc nations during the Cold War, is increasingly impractical as well. When officials fearing the anti-corruption campaign turned to non-action to avoid becoming targets for anti-graft investigators, the government took measures to target passive inaction in addition to active corruption. By all measures, Xi Jinping has been remarkably effective in making exit both costly and uncertain. There are now few options for escape for anyone dissatisfied with the government.

In the most literal sense of the word, Xi has tightened the government's control not only over state media but the propaganda apparatus that controls it, removing the ability of his opposition to organize and voice their complaints. And beyond that, crackdowns on lawyers and foreign nongovernmental organizations have also limited the ability of grassroots opposition to develop. And of course, the CCDI is unceasing in its efforts to weed out factions at all levels of government.

So, if Xi is trying so hard to crush organized opposition, why does opposition still try to organize? The difficulty, perhaps, lies in the fact that as part of a general initiative to dismantle the collective leadership structure, Xi is trying to suppress voice in all forms rather than permitting its selective exercise. But collective leadership was not simply a mutual decision from the Communist leadership to iron out Mao-era vicissitudes — it was a conscious choice to maximize the power of Deng Xiaoping, China's quintessential reformist leader. Deng recognized that he needed buy-in from leaders across the political spectrum, including from anti-reform conservatives. He placed them in positions where they could have a say on policy and could be called to support him, yet also be safely sidelined when their voices were inconvenient. In short, Deng knew how to co-opt his opponents and create a loyal opposition, but opposition in Xi's China is all disloyal, ipso facto. There are no obvious moves to co-opt any groups or give the opposition a channel to have the ineffectual voice that could forestall active resistance.

This interplays with the sealing of the exits. With fewer options for escape, those cadres who would otherwise have attempted to escape the system must choose to either throw their lot in with the regime or band together for survival. Expecting little mercy from Beijing, it becomes an easy choice.

Xi essentially wants to coerce loyalty out of the Party by eliminating exit and voice. This is difficult, however, because he has been much more successful at sealing exits than he has been at managing expression. This has led to the development of a much more concrete opposition ahead of the 19th Party Congress. While the most visible forms of resistance will be the public disobedience shown by protesting workers and disgruntled publishers and journalists, resistance in its most dangerous form to Xi will emanate from elements within the party: elements who have access to networks and therefore organizational power — and have the potential to co-opt public forms of unrest.

The problem for Xi is that the remedy for China's ailing economy — the attempted imposition of decisive rule by a single individual — is one that produces factions in the first place. And any resultant groups that form could be more dangerous to him that any that existed before his presidency. If Xi fails to control the development of factional rifts in the Communist Party, the prospects for maintaining a coherent central government could be near impossible. And, like China's experience following the Qing, if control were to falter, the restoration of effective central government could take years, if not decades.

This article, originally titled: No Exit in China, is republished with permission of Stratfor.