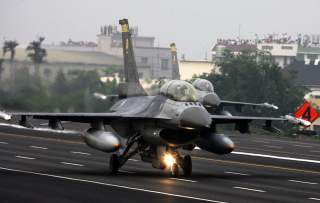 Now the Taiwanese military is looking to boost its surface-to-air missile deterrence to fend off incoming Chinese warplanes, as its relatively small fleet of fighters is becoming overstretched.

The wear and tear on Taiwan’s military aircraft are increasing, as they need to take off to intercept or monitor Chinese bombers or spy planes whenever they approach, an almost daily occurrences now that Beijing’s breaches of the island’s airspace is so frequent that it’s no longer news.

Taiwan’s air force has more than 110 F-16 Fighting Falcons and 46 Mirage 2000 multi-role fighters, and the fleet is facing higher service and maintenance costs due to the increasing age of these planes.

Now the Taiwanese military is looking to boost its surface-to-air missile deterrence to fend off incoming Chinese warplanes, as its relatively small fleet of fighters is becoming overstretched.

Taiwanese President Tsai Ing-wen is scheduled to inspect an MIM-104F Patriot missile system imported from the US and installed at Taichung’s Ching Chuan Kang Air Base, during the annual Han Kuang military exercises to be held in June that will see more airmen and weaponry mobilized than in previous years, Taipei Times and Central News Agency reported on Monday.

This year’s drill is aimed at identifying loopholes in air defense at a time when many are concerned over whether the island’s feeble air force could fend off or delay People’s Liberation Army air raids in the event of a war.

Among the island’s tactics to foil invading PLA warplanes is the seemingly whimsical use of inflatable, highly convincing models of fighters, tanks, missile vehicles etc deployed at frontline locations to perplex and fool the enemy, in a bid to protect vital air bases.

A source familiar with the tactic was quoted as saying that the focus of this year’s exercises would be subterfuge.

The source also admitted that the increasing number of PLA maneuvers and their quick succession had increased the wear and tear of Taiwanese fighters and other aircraft, straining repair and maintenance work as well as the military’s annual budget, which stood at NT$327.8 billion (US$10.7 billion) for 2018.

Last year, Taiwan’s Defense Ministry had to fill a gap of NT$590 million, from its own reserve fund, for more interception missions.