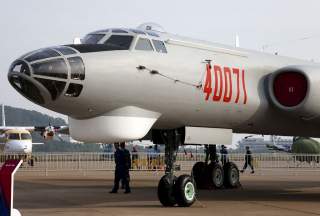 China recently deployed one of its H-6 bombers on a long-range patrol of the Nine-Dash Line that it claims marks the extent of its territorial waters in the Pacific Ocean. The flight was made in response to remarks by President-elect Trump suggesting that the United States might abandon its long-standing policy towards Taiwan and recognize the island as an independent country.

As such, the patrol was an almost flattering imitation of the U.S. Air Force’s practice of flying enormous B-52 bombers by countries that have aroused Washington’s ire as a means of broadcasting threat and registering displeasure. Take, for example, a B-52 overflight of waters claimed by China one year ago.

China, Russia and the United States are the only countries to operate long-range strategic bombers in significant numbers. Like the American B-52 or Russian Tu-95 Bear currently in service, the H-6 dates back to the early 1950s. Up to 180 H-6s have been produced over the years, the majority of which continue to serve in the People’s Liberation Air Force (PLAAF) and Naval Air Force. Unlike China’s newer warplanes, the cruise-missile toting bomber has actually been tested in battle.

On September 3 of this year, Gen. Ma Xiaotian of the PLAAF announced that China was developing a new strategic bomber, but did not clarify if it would be another variant of the H-6 or an entirely new bomber.