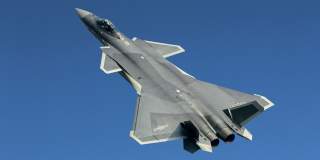 China's J-20 fighter, the first of what could be several 5th generation fighters from Beijing made a big splash, debuting publically yesterday.

According to a report in the Wall Street Journal, "two J-20 jet fighters hurtled over hundreds of spectators, including several foreign military delegations, in a 60-second flyover during Tuesday’s opening ceremony of Airshow China, the country’s biggest aerospace and defense exhibition." The report continued, noting that "The jets, whose thundering engines set off alarms in cars parked below, underlined China’s recent progress in developing air power that the U.S. and its allies are concerned may be used to assert Beijing’s territorial claims in the region and other broader strategic interests. Showcasing the radar-evading fighter is also an attempt to bolster China’s efforts to export stealth fighter technology..."

But we all know the real question: how would the plane do against the world's best fighters? Say America's F-22 Raptor?

For your reading pleasure we are reposting an article from last year that explores this very question. So if the J-20 and F-22 met in the skies in a future conflict who would win? Let the debate begin.

Dave Majumdar is the Defense Editor for The National Interest. You can follow him You on Twitter: @DaveMajumdar.