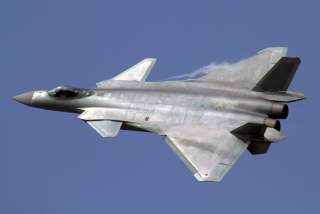 On January 11, the People’s Liberation Army Air Force (PLAAF) released a statement revealing that the J-20 fighter had participated in its first combat exercise at an undisclosed location (some reports suggested it was in Inner Mongolia). According to the Strait Times, a Singaporean newspaper, the statement said that during nine days of drills, the J-20 faced off against its less advanced counterparts, the J-16 and J-10C. The PLAAF described the drills as realistic and said that the J-20 practiced beyond-visual-range aerial fighting maneuvers.

Xinhua News Agency, which is run by the Chinese Communist Party, added a few more details. Specifically, it said the combat drills had included the Y-20 military transport aircraft and H-6K bombers alongside the J-20, J-16 and J-10C. The Y-20 is a massive transport aircraft that was first delivered to the PLAAF in June 2016. Xinhua further said that the exercise “is aimed at improving the air force’s capability to win battles.”

The J-20 is a single-seat twin-engine aircraft developed by the Aviation Industry Corporation of China. Beijing first began exploring building what would become the J-20 sometime in the 1990s. Although the plane first flew in 2011, Beijing refused to acknowledge its existence until 2016. In September 2017, the Chinese military said that plane had been commissioned, but last week’s drills constituted the first time Beijing has acknowledged that it participated in combat drills.

The J-20 is only the third stealth aircraft in the world after the F-22 and F-35, both American planes. Some Western observers have speculated that the J-20 is modeled off F-22 technology, pointing to the similar shapes of the aircraft. Without question, there have been significant alterations made by China. For instance, the J-20 has a distributed aperture system (DAS) that allows pilots to see in every direction similar to the F-35 but not the F-22. The designers of the J-20 have also claimed that it has “a longer range, more internal fuel capacity and a larger weapons capacity than the US F-22 and F-35 fighters,” according to the Hong Kong–based South China Morning Post.

According to Kyle Mizokami of Popular Mechanics, the J-20 “stores all of its weapons internally to preserve its radar-evading shape, and has three internal bays: one large bay for up to six PL-12 beyond visual range air-to-air missiles, roughly the same as the American AIM-120 missile, and two smaller bays with one short range air-to-air missile each.” The Center for Strategic and International Studies has further stated: “The J-20 is also slated to carry a variety of advanced electronic systems. This technology includes an active electronically scanned array, a chin mounted infrared/electro-optic search and track sensor, and a passive electro-optical detection system that will provide 360° spherical coverage around the aircraft.”

General David L. Goldfein, the chief of staff of the Air Force, seemed to imply that the J-20 is able to link into other defense systems and access real-time intelligence provided by other assets like satellites. If so, than the J-20 is similar to the F-35. As Goldfein explained it: “It’s not about what the F-35, or the J-20, or the F-22, or the J-31 can actually do in a one vs. one. It’s an interesting dialogue to have, but it’s not very compelling because we’re not going to ever have the F-35 in there by itself—ever. We do family of systems.”

How many J-20s China has built is unknown, and some observers speculate that China might struggle to mass produce them. “China’s manufacturing sector has the reputation of pumping out products at an impressive speed, but even Apple had to carefully time its product release as per production status in China for its new iPhones, and it’s not surprising to see crunches in supply for more sophisticated warplanes as a whole plethora of factors ranging from parts to manpower determine the actual output,” Xi Yazhou, a Chinese military columnist, wrote recently, according to Asia Times. One particular bottleneck for China is likely to be that Beijing wants to use domestically manufactured engines. China has continuously struggled to domestically manufacture reliable aerospace engines.

The J-20 aircraft is not the only stealth aircraft that China is building. It is also engaged in the production of another plane, which is being referred to as the FC-31/J-31. The FC-31 designation suggests that that aircraft might be designated for export. Jeffrey Lin and P. W. Singer have written of the plane,“Built by the Shenyang Aircraft Corporation (SAC), the twin-engine J-31 is roughly the same size as the American F-35, with a range of 775 miles, a maximum takeoff weight of 28 tons, and a Mach 1.8 top speed.” The same observers suggest, based on a recent prototype, that China may be building a carrier-based variant of the J-31.