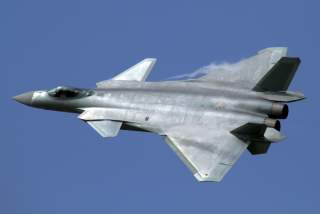 The Chinese People’s Liberation Army Air Force (PLAAF) has declared its Chengdu J-20 fifth-generation stealth fighter operational. With the J-20 formally attaining initial operational capability, China becomes the only the second nation-state to have developed an operational stealth aircraft after the United States. Russia, which is currently developing the Sukhoi Su-57 PAK-FA, is running behind that pack since its new fighter will not enter operational service for some years to come.

“China's latest J-20 stealth fighter has been commissioned into the air force's combat service,” according to Beijing official state Xinhua news agency–which was then posted by the Chinese Ministry of Defense on February 9.

The J-20 has been in development for years and was first spotted in 2011. In the intervening years, the jet has evolved as the Chinese further matured and refined the design. Eventually, as the J-20 neared the completion of its development cycle, the PLAAF debuted its stealthy new jet during a flyby during the 2016 Zhuhai airshow.

The first PLAAF operational units seem to have started to receive the J-20 around March 2017. Since then, the new jet participated in a military review at China’s Zhurihe base in July 2017 and it has only been used during various wargames. According to China’s state-owned Global Times, the J-20 was featured extensively during the People’s Liberation Army’s Red Sword 2017 exercises.

“Once a new type weapon or equipment is delivered to the military, it will be tested by troops specializing in testing, and the troops will inform the relevant department if adjustments are needed. Normally this process takes 1-2 years,” Song Zongping, a Chinese military expert told the Global Times. "After this process, the new weapon will be formally armed by combat troops, which means it will be used in actual combat, and the J-20 will engage with rivals in the future who dare to provoke China in the air."

It is unclear exactly how close the J-20 is to being truly operational. An initial operational capability is often a long way off from a fully operational capability. In the case of the fifth-generation Lockheed Martin F-22 Raptor air superiority fighter, the aircraft still had many teething issues when the U.S. Air Force declared it operational in 2005. Meanwhile, the tri-service fifth-generation Lockheed Martin F-35 Joint Strike Fighter, both the United States Air Force and Marine Corps declared their versions of the stealthy single-engine jet to be operational with a very basic interim capability. Only the U.S. Navy is holding out for a full warfighting capability before declaring their version of the F-35 operational. Thus, only time will tell just how operational the J-20 really is.