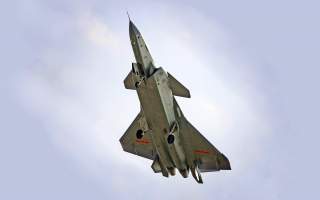 China has sent its most advanced fighter jet on a new kind of training mission.

This week Chinese state media reported, citing a People’s Liberation Army (PLA) Air Force spokesperson, that its J-20 is undergoing an at sea training program. “The J-20 has conducted a combat training mission in sea areas for the first time, and this has further strengthened the comprehensive combat capability of the PLA Air Force,” Shen Jinke, the PLAAF spokesperson, was quoted as saying. He added that the J-20 has already participated in simulated combat drills with other PLAAF planes, including the J-16 and J-10C.

With regards to at sea training, the Global Times quoted military expert Song Zhongping as explaining: “The J-20 is a multifunctional fighter jet, so apart from air combat, it also needs to be capable of attacking targets at sea and on the ground, which means training at sea area is essential.” In fact, according to Song, at sea combating training is a “compulsory course” for the entire PLA. This makes sense as nearly any conceivable clash with China’s primary military competitor, the United States, would entail combat over the sea. This includes fighting over Taiwan, the South China Sea, or the East China Sea, as well as defending the Chinese mainland.

The J-20 fighter jet is China’s most advanced combat aircraft. Beijing said it had attained initial operational capability back in February of this year. In theory, the J-20 is supposed to be one of China’s two fifth-generation fighters. However, according to a report in the Hong Kong-based South China Morning Post, the W-15 engine that was intended to power the J-20 exploded during testing, and Beijing has yet to be able to fix the defect. As such, the initial J-20s are equipped with older WS-10B engines. This is notable because the WS-10B’s thrust-to-weight ratio is reportedly not able to power the J-20 to supersonic speeds without the use of afterburners, which eliminates the stealth that is a key component of fifth-generation aircraft.

Still, the single-seat, twin-jet J-20 is expected to bolster Chinese air power. In its most recent report to Congress on Chinese military power, the Department of Defense said, “The PLA’s planned development of a fifth-generation fighter force will bolster its air-to-air capability. The J-20 and FC-31 are expected to feature high maneuverability, low-observability, and an internal weapons bay.” It added: “Other key features include modern avionics and sensors that offer more timely situational awareness for operations in network-centric combat environments; radars with advanced tracking and targeting capabilities; protection against enemy electronic countermeasures; and integrated EW systems.”

The J-20 is sometimes compared to America’s F-35 as it is an information network that makes it a force multiplier more than a stand alone aircraft. This is because the J-20 has a “a passive electro-optical detection system that will provide 360° spherical coverage around the aircraft,” similar to the F-35 Joint Strike Fighter.

The Center for Strategic and International Studies’ China Power Project has estimated the length of the J-20 at roughly 20.3 and 20.5 meters and a wingspan of 12.88-13.5 meters. Some analysts believe it has a slightly lower maximum take-off weight than the F-22. However, it is also believed to have a massive fuel capacity of 12,200 kilograms without external tanks and 25,000 kg with them. By contrast, the F-22 has a 8,200 kg fuel capacity without external tanks and only a 11,900 kg capacity with them.

The news that China has quickly implemented at-sea combat training missions for the J-20 shouldn’t come as a surprise. A 2015 report by the Rand Corporation noted that the “J-20’s combination of forward stealth and long range could hold U.S. Navy surface assets at risk, and that a long-range maritime strike capability may be a cause for greater concern than a short-range air-superiority fighter like the F-22.” Thus, the J-20 could be another capability China uses to force U.S. surface ships further away from China’s shore. At the same time, there has been some debate about whether the J-20’s primary purpose is air-to-air combat or long-range strike. Song’s comments above suggest that long-range strike will be one of the plane’s primary missions.

There have also been some reports that the J-20 will eventually serve as China’s primary carrier-based fighter jet. However, the Chinese government has disputed that possibility. In November of last year, PLA Rear Adm. Zhang Zhaozhong said on a Chinese broadcast that the J-20 was not built for carrier operations. “J-20’s structural design and components are all intended for use as a land-based warplane and thus its structural strength may not have been reinforced for take-off from or landing on a carrier, as in these circumstances the plane would have to withstand huge counterforce and inertia,” Zhang said, the Asia Times reported. The J-20’s wings are also not foldable, according to the same report. Thus, the J-15 seems to be China’s main carrier-based aircraft for the foreseeable future.

Zachary Keck is a former managing editor of the National Interest. He tweets at @ZacharyKeck.