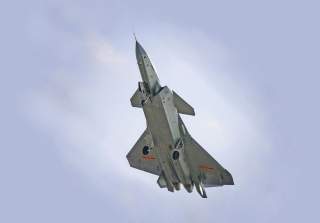 The Chinese Military has advanced dramatically over the past quarter century.

No longer is Beijing’s armed forces filled with recruits that are poorly trained or lacking the arms needed to fight a major war.

China has invested in platforms that are specifically designed to take on the United States in contested parts of Asia, such as Taiwan, the East China Sea and the hotly disputed South China Sea. Systems include the much discussed DF-21D (or commonly referred to in the press as the ‘carrier-killer’ missile), cruise missiles, advanced mines, submarines, drones and other anti-access/area-denial weapons of war.

In the air, Beijing has also made some major advances. Of specific note is the J-20, or China’s new 5th generation fighter. Meant to counter America’s 4th and 5th generation planes as well as aircraft from Japan, Taiwan and others, the plane has generated tremendous interest in the U.S. as well as international defense community.

But how would the plane do in combat? Could it take on, for example, the F-35 Joint Strike Fighter? What about Taiwan’s F-16s or Japan’s F-15s? Below, we have taken past articles written by Dave Majumdar and two by Kyle Mizokami and packed them into this one post for your reading pleasure.

So who would win a future battle for Asia’s skies? Read on.

By Dave Majumdar: The United States Air Force would maintain an “asymmetric” advantage over potential adversaries in the Western Pacific even after the Chinese People’s Liberation Army Air Force inducts the Chengdu J-20 stealth fighter into operational service. That’s the contention of the service’s top uniformed officer—who was asked about the potential geopolitical implications of the introduction of the new Chinese warplane.

By Kyle Mizokami: The balance of air superiority over the island of Taiwan is slowly shifting. Once assured by a fleet of sleek, modern Republic of China Air Force fighters, the rise of China—and the decline of Taiwan’s defense budget—has gradually changed the equation in favor of China.