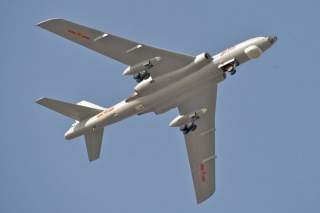 China’s Air Force conducted its first-ever drill in a strategic strait near Japan on Thursday.

According to China’s Ministry of National Defense, the People’s Liberation Army Air Force (PLAFF) conducted its first exercise over the Miyako Strait. PLAAF spokesperson Shen Jinke said that the drill aimed to “level up the PLA Air Force's mobility and combativeness.”

The press release on the Ministry of National Defense’s website stressed that the drill was not aimed at any country, and Shen was quoted as saying— according to the Shanghai Daily— that: “In line with international laws and practices, offshore drills by the PLA Air Force beyond the First Island Chain will proceed in consideration of actual situations.”

Although the press release did not specify which aircraft was used in the drills, the pictures revealed the pilots flew China’s new Xian H-6K bomber. The H-6K is the most advanced variant of the H-6 bomber, which is a locally built version of the Russian Tupolev Tu-16 Badger that Moscow first deployed during the 1950s. The PLAAF first received a TU-16 bomber from the Soviet Union in 1958 and has been modifying it ever since.

Chinese state-owned media have previously described the H-6K, which entered into service in 2013, as a “medium-sized craft designed for long-range attacks, stand-off attacks and large-area air patrol. Unlike its predecessor, the H-6K can carry cruise missiles under its wings. The H-6K also maneuvers more deftly than the H-6 and requires a smaller crew to operate.”

Among the H-6K’s greatest advancements is “its use of two Russian-made 12-ton thrust D-30-KP2 turbofans and lighter-weight composites have reportedly extended its range by 30 percent to a combat radius of 3,500 km.” Indeed, Chinese media have claimed that the bomber, which is nuclear capable, could be able to reach all the way to Hawaii with Changjian-10K (CJ-10k) air-launched cruise missiles.

The location of the latest drill is almost certain to unnerve Japanese officials. To begin with, the flyover was near the Diaoyu/Senkaku Islands, which Japan administers but China contests.

More importantly, the Miyako Strait is a gap 160 miles wide between Japan’s Miyako and Okinawa islands. It provides the crucial gateway for China’s North and East Sea Fleets to access the wider Western Pacific.

The Miyako Strait would also be a crucial battleground in any war between Japan and China, and Tokyo would likely use its favorably geography around the Strait to execute an anti-access/area-denial strategy against China.

As Kyle Mizokami has previously described on The National Interest:

Japan, which spends roughly a quarter as much on defense as China, could use the Ryukyus to execute an Anti-Access, Area Denial (A2/AD) plan in the Miyako Strait. Like any good A2/AD strategy, such a plan in the Strait would require a fraction of the spending necessary to overcome it.

The PLAAF’s drill over the Miyako Strait is a tacit recognition of this crucial weakness. It also shows a determination on the part of China to try and overcome this weakness over time. At the same time, the drill is also indicative of the Chinese Air Force’s desire to conduct training exercises further away from the mainland. Back in March, the PLAAF conducted its first ever drill over the Western Pacific. That one was conducted over the Bashi Channel, a waterway between Taiwan and the Philippines.