This Is China's Master Plan to Destroy the U.S. Navy in Battle 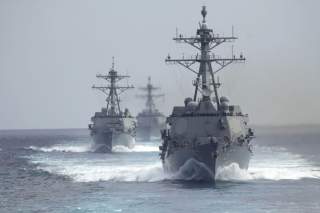 When Chinese officers go to bed at night, what do they fear most?

Despite all the hard work, all the billions of dollars spent, no Chinese sailor wants to tangle with the U.S. Navy. As one retired Chinese senior defense official told me in late 2014: “The 3 A.M. crisis ‘call’ I feared the most is that we were at war with your navy.”

While such a statement surely tickles the hearts of Pentagon officials, know this: Fear, when focused properly, can make the mind—and the collective power of nations—help craft solutions to complex military challenges that might at one time have seemed nearly impossible.

For example, during the 1995-1996 Taiwan Crisis, Beijing’s ‘nightmares’ were nearly realized. When faced with a superior military power that could deploy massive amounts of advanced naval assets and project power from multiple domains like no other nation in history, China simply could not compete. Chinese leaders, especially President Jiang Zemin, would fear the power of American Carrier Battle Groups (CBGs) and their ability to negate what little military might Beijing could bring to bear on Taipei. At one point, there is strong evidence to suggest China could not even find the location of U.S. Carriers—a big problem for sure. The crisis would clearly shape Beijing’s thinking on the development of weapons that could provide an asymmetric edge.

So what weapons would China use against the U.S. Navy if combat did ever commence? Some of these weapons, and I am talking to you National Interest readers, you know--and know well. Others, such as one or two of the three platforms I would like to focus on for this blog post, are not as well known, and yet, could give the U.S. Navy the greatest of fits. In a Taiwan crisis scenario—a scenario in which Beijing to this day still sees as the greatest possible military challenge—the following listed below are platforms U.S. strategic thinkers truly fear (and arguably don’t have exact solutions to mitigate at the moment):

A not-so-fun fact you may not know: China has the world’s largest collection of sea mines. Just how many you ask? Estimates vary; however, some see Beijing holding 80,000-100,000 sea mines. Now, to be fair, China does not have the capability to deploy all of these mines at once, and would have to be fairly creative in deploying them in contested seas around say Taiwan or in the South China Sea—like using civilian vessels in small numbers to ensure a lower probability of detection. Yet, as history shows us, it does not take an advanced mine or a lot of them to do tremendous damage, and Beijing knows that history all too well, as TNI author Lyle Goldstein reminds us:

“A fascinating interview appeared several years ago in the Chinese military magazine 兵工科技 [Ordnance Science and Technology]...The professor goes on to cite [the] example of a U.S. Navy ship, the frigate Samuel B. Roberts, holed by an Iranian mine back in 1988.”

The mine, by the way, was “a cheap, Russian-designed Iranian mine” that “shattered the keel and knocked out the power. Within 90 seconds, the frigate had taken on nearly half its total displacement in water — two main spaces completely flooded.” Yikes.

Let’s not go down the road of gushing over various Chinese missiles with their ranges and capabilities. While important, it’s the amount of missiles that could be aimed at the U.S. Navy in a Taiwan scenario that is the real threat. Even the best missile defenses in the world, which the United States holds in its possession (and I am a big supporter of), might just not be enough.

The challenge itself is not an easy one to overcome. All China would have to do is send out a massive barrage of missiles—and forget for a moment the type (cruise or ballistic) or domain they are launched from (land, sea or air)—with the goal of overwhelming U.S. naval defenses.  Even assuming American missile defenses could stop every single one it could engage, the number of available interceptors on ship to respond to such an attack would be fixed and is easily known—and easy to overwhelm.

Put another way, as noted for The Diplomat a few years back (and have opined on several occasions now), simple math is the problem here:

Can America’s Navy Fight With a ‘Blindfold’ On?

Ok, so to be fair, this topic—China possibly using anti-satellite (ASAT) weapons on U.S. assets—is getting a lot more attention thanks to outlets like 60 Minutes and others bringing the topic to light. And it would not just impact the U.S. Navy for sure. However, imagine for a second if China unleashed its missiles skyward, attacking and destroying American satellites in orbit. Could America really wage an effective counter attack without modern systems such as GPS and communications to guide a counter-strike? This why so many people are commenting about the danger of Chinese anti-satellite weapons.

While America also has such a capability, it creates for an interesting escalation dynamic: what happens if tensions are rising, say in a Taiwan scenario, and a decisive advantage is gained by striking your adversaries satellites in space. At what point is the risk of conflict great enough that you attack? What is the tipping point for China or America? How will your foe, potentially being dealt a devastating blow, respond? Keep in mind; China and America both have nuclear weapons.

Let’s Close on a Positive Note:

Thankfully, even though there are many pressure points that could create possible conflict between Washington and its allies and Beijing, the chances of actually war seem pretty low—for now. However, if China keeps pushing in the East and South China Seas, or if President Xi decides the Taiwan question must be settled all bets are off. Even more of a reason why policy planners and national security minded folks need to beef up on Beijing’s military arsenal. Let’s just hope such knowledge never comes in handy.