China's Master PLAN: How Beijing Wants to Break Free of the 'Island Chains' 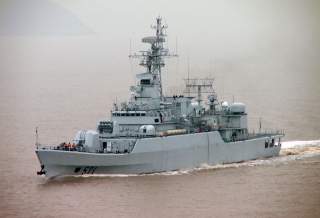 On December 25, 2016, the PLAN deployed its Liaoning carrier group beyond the First Island Chain for the first time, in what many considered to be a warning to Taipei after President Tsai Ing-wen’s phone call with US President-elect Donald Trump. The PLA’s activities in the Western Pacific continued after President Trump told President Xi that the US would honor the ‘One China’ policy.

On March 2, PLAAF fighters, bombers, and early warning aircraft transited the Miyako Strait and entered the western Pacific for joint exercises with the PLAN’s far-sea training taskforce including the destroyers Changsha and Haikou and supply ship Luomahu. A PLAN task force left Sanya on February 10 for a joint exercise with an aviation force in the South China Sea and the eastern Indian Ocean, and then returned by the south-eastern waters of Taiwan to the Western Pacific.

The PLAN’s naval drills are not only political exercises and a warning to the US, but also a basis for routine PLAN activities in the future. China’s maritime strategy is clearly moving beyond the traditional ‘island chain’ boundary that has limited the PLAN’s operations and development in the past.

The island chain is originally an American strategic concept that was adopted by then PLAN commander Admiral Liu Huaqing who set “command of the sea out to the First Island Chain” as the initial goal for modernizing the navy in the 1980s. But while Western media and analysis focus on Liaoning’s deployment through the First Island Chain, Chinese military media chose to de-emphasise the island chain concept. On  January 5, 2017, the PLA Daily published an op-ed suggesting the island chain barrier was just a psychological threshold for PLAN itself.

The Chinese media’s reaction is highly significant in the signals it sends about China’s future naval intentions. It makes clear that the most significant barrier to China’s development of sea power is not the geopolitical environment or lack of capability but a psychological fixation over the island chains which has become an obstacle to PLAN’s formulation of a comprehensive maritime strategy. This intangible mental boundary needlessly prevented development of true sea power. Internal debate within the PLAN over the significance of the First Island Chain has recently intensified. In January 2013, political commissar of the Liaoning, Mei Wen, stated that “the so-called first island chain and second island chain should not be chains to bind up development of the Chinese Navy, but navigation marks for the Chinese Navy to sail into the vast oceans.”

This encouraged the PLA to shift its view of the island chain. On February 7, 2014, PLA Naval Military Studies Research Institute member, Zhang Junshe, wrote in the PLA Daily that the PLAN should change its strategic mindset and not be restricted by the existence of the island chains. This will alter the debate among Chinese thinkers and transform China’s focus from the limitations of the island chain to development of a blue water navy.

If China is breaking self-imposed barriers, expect expeditionary deployments to become a routine PLAN activity in the near future. That would also require greater operational support from other PLA arms. In this context, the PLA and PLAAF’s Far Sea joint exercise on March 2 suggests that China’s Eastern Theater Command aims to increase its ability to project power and gain air superiority beyond the mainland to support naval operations.

From Taiwan’s perspective, all of this increases risks. Sea-air joint operations, along with operations by the Rocket Force and Strategic Support Force against Taiwan’s C4ISR (Command, Control, Communications, Computers, Intelligence, Surveillance and Reconnaissance) system, reinforce the perception of a deteriorating security outlook across the Taiwan Strait. Taiwan’s Ministry of National Defense has confirmed that Chinese DF-16 precision ballistic missiles now target the island.

With a lot of focus on Chinese activities in the South China Sea, it’s important not to forget Taiwan’s security interests are at stake as well. Chinese naval activities, such as the Liaoning deployment, and regular probes by PLAAF airpower, are reinforcing the prospect of a more contested security outlook for Taiwan.