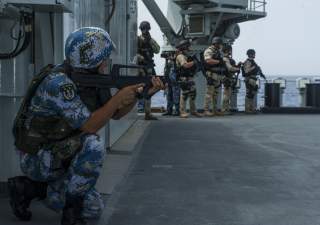 The People’s Liberation Army has not officially released a new generation of operational regulations (作战条令)—which are believed to be roughly equivalent to doctrine—since its fourth generation of them in 1999. The protracted process for their revision has apparently become a “bottleneck” for the PLA’s advances in joint operations and training. Evidently, its attempts to update these doctrinal documents in response to new strategic challenges have lagged behind its intended progression towards jointness, while failing to keep pace with changes in the form of warfare. There may be several factors that have delayed the revision process, including interservice rivalry or bureaucratic and cultural impediments to change. These dynamics have plagued attempts to advance PLA reforms in the past, yet the historic reform agenda that is ongoing has sought to overcome such obstacles. At this point, the fifth-generation operational regulations do appear to be forthcoming within the foreseeable future, given multiple indications of extensive, ongoing revision and evaluation. However, the timing remains uncertain. Since operational regulations are considering integral in guiding the PLA’s approach to training and actual combat activities, the completion of the revision and full release of this fifth generation could indicate the PLA has overcome prior challenges to achieve substantive doctrinal progress that could enable future advances, including perhaps in space and cyber warfare.

Since the early 2000s, the PLA has been engaged in an extensive process of revision of its fourth-generation operational regulations. Although the actual contents of the PLA’s operational regulations have never been released, an understanding of the underlying process and those involved is nonetheless informative. The Academy of Military Science Operational Theories and Regulations Research Department (作战理论和条令研究部) has traditionally played a leading role in this process. For instance, Maj. Gen. Ren Liansheng (任连生), who served as its director between 2006 and 2010; Maj. Gen. He Lei (何雷), who was director during 2010 and 2011; and Maj. Gen. Zhang Shiping (张世平), director starting in 2011, may each have served as managing deputy director of Office of the All-Military Committee for Editing Operational Regulations (全军编审作战条令委员会办公室) during his tenure, with researchers affiliated with the department also as members. The apparent centrality of the Operational Theories and Regulations Research Department to the formulation of the PLA’s doctrine renders the writings of its leadership and researchers of particular importance to those seeking to understand the evolution of the PLA’s doctrinal approach to warfare. For instance, its series of lectures (教程) released in 2012—including “Lectures on the Science of Joint Campaigns” (联合战役学教程) and “Lectures on Joint Campaign Command” (联合战役指挥教程)—may be closely linked to the revision of the operational regulations themselves.

The protracted, uncertain trajectory of the revision process could indicate underlying impediments and challenges in coordination that have undermined the PLA’s ability to advance the formulation of updated operational regulations. The initial revision process seems to date back to the early 2000s. As of March 2008, the fifth generation of operational regulations was reportedly complete, pending only approval from the Central Military Commission. However, their official release was never announced and seemingly did not occur, which might have indicated a lack of consensus or judgment that further changes were necessary at the commission level. Potentially, the PLA decided to release new campaign guidelines and combat regulations on a rolling basis instead. In subsequent years, there have been continued indicators in official PLA media that the revision process has not been fully or satisfactorily completed, such as calls for progression beyond theoretical outcomes towards operational regulations. The revision seemingly remains ongoing to this day.

Within the past several years, substantive progression towards the finalization of fifth-generation operational regulations appears to have occurred, with high-level prioritization of the process. In the summer of 2014, the former General Staff Department organized an “all-military research and discussion activity” that was intended as preparation for the revision of operational regulations. The event focused on the innovation and development of operational theories, as well as the “resolution of important operational difficulties and problems.” In particular, the discussion addressed “the mechanism for victory in informationized warfare, fundamental problems in joint operations, and models for operations and tactics.” This joint evaluation of the results of studies undertaken in support of the revision process was reportedly intended to “avoid tactical innovation ‘behind closed doors.’” Perhaps, this consultative process and discussion might have been intended to make the revision more inclusive of stakeholders throughout the PLA and to build a broader consensus on issues that might have been complex or contentious in earlier stages of revision. In early 2015, the Operational Theories and Regulations Research Department’s new book, Introduction to Operational Regulations (作战条令概论), which was described as a “cornerstone” for the revision process, underwent expert appraisal. The “verification” of the operational regulations has also involved “operations experimentation” (作战实验), a new discipline that is receiving increased attention in the PLA. Reflecting the high-level importance of the issue, Xi Jinping himself mentioned the importance of “paying close attention to the construction of a new generation of joint operational regulations, joint operations command regulations, etc.” during his summer 2016 visit to the PLA’s new Joint Operations Command Center. However, there has yet to be an official announcement about the status of this forthcoming generation of operational regulations.

Although the PLA’s operational regulations may remain opaque, a new “revolution in doctrinal affairs” appears to have been gradually occurring, as the PLA prepares to confront the challenges of future warfare. The apparent lengthiness of the revision process—and unexpected, unprecedented delay in the issuance of fifth-generation operational regulations—could indicate substantive impediments to progress that are only just starting to be overcome, under the leadership of Xi Jinping. Within the foreseeable future, the new generation of operational regulations will likely include revised campaign guidelines for each of PLA’s services—the Army, Navy, Air Force and Rocket Force—as well as the new Strategic Support Force, along with force-wide guidelines for joint operations and joint operations command. To date, the PLA seemingly does not have official campaign guidelines that address operations in the space and cyber domains. Potentially, this fifth generation will establish the PLA’s first operational regulations for space and cyber operations, which are considered critical strategic frontiers for the PLA that are integral to joint operations. Indeed, Maj. Gen. An Weiping (安卫平), deputy chief of staff of the Northern Theater Command, recently called for the introduction of “military cyberspace operations regulations and statutes.” The contents of this fifth generation of operational regulations, while not publically released, will presumably take into account recent changes to the PLA’s military strategic guidelines, reflecting its evolving missions and advancing capabilities. Looking forward, their release could be officially announced as a critical component of the PLA’s new stage of “below the neck” (脖子以下) reforms, which seek to enact deeper changes than the initial “above the neck” (脖子以上) stage of high-level, organizational changes.

Elsa Kania is an analyst focused on the PLA’s strategic thinking on and advances in emerging technologies, including artificial intelligence and quantum technologies. Elsa is also in the process of cofounding a startup research venture.