China's Military Gears up for Missile Warfare with U.S. 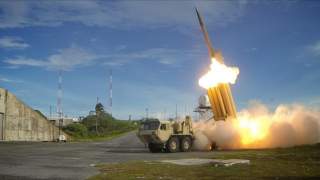 China’s military is developing offensive and now defensive missiles in preparation for a future missile-dominated conflict with the United States.

Beijing’s arsenal of ballistic and cruise missiles has been growing steadily for decades as new systems were fielded in an array of ranges – short, medium and intercontinental. Several long-range cruise missiles, capable of carrying nuclear or conventional payloads also are deployed.

And one of China’s most secret missile programs is a revolutionary hypersonic strike vehicle that skims the upper atmosphere and can maneuver in a bid to defeat U.S. strategic defenses.

China for years has denounced U.S. missile defenses as destabilizing. But for the first time last month, the Chinese Defense Ministry confirmed the military is developing a new long-range anti-missile system.

Ministry spokesman Sr. Col. Yang Yujun, in what appeared to be part of a carefully choreographed disclosure, was asked at a briefing about Chinese state media publicizing a six-year-old flight test and intercept of a Chinese version of the U.S. ground-based, mid-course anti-missile defense system.

“To develop suitable capabilities of missile defense is necessary for China to maintain national security and improve defense capabilities,” Yang said July 28. “It is not targeting any other country or target nor is it jeopardizing the international strategic equilibrium.”

Yang repeated the Chinese propaganda theme that Beijing is “deeply dissatisfied” and opposes the deployment of the defensive missile system, despite U.S. and South Korean assurances that THAAD system has no capabilities against nearby Chinese offensive missiles.

“We will pay close attention to relevant actions of the U.S. and the [South Korea] and will take necessary measures to maintain national strategic security as well as regional strategic equilibrium,” the ministry spokesman added.

Yang provided no details on what measures are being planned in response.

THAAD is one of the most effective ground-based U.S. missile defenses capable of knocking out a variety of medium- and short-range missiles. Its radar is said to be wide-ranging and capable of detecting missile launches hundreds of miles away.

When THAAD – also deployed on Guam — is combined with sea-based Aegis ship-based missile defenses that can be linked together through what the Pentagon calls cooperative engagement, the combination provides U.S. and allied nations in Asia with formidable defenses capable of protecting large areas against missile attack.

Chinese state-run media zeroed in on Yang’s comments on missile defense this week highlighting what it called China’s “spear and shield” of offensive and defensive missiles.

A report in China Military Online, affiliated with the official PLA Daily newspaper, said the recent disclosure of the video showing China’s first strategic missile defense test to intercept a target missile coincided with the propaganda campaign against THAAD deployment in South Korea.

“The problem is not whether the war will break out, but when,” the report stated. “Our task is to develop the ‘trump card’ weapon for China before the war.”

That has been kept secret in official accounts of Chinese missile defense efforts in the linkage between China’s missile defenses and its offensive anti-satellite missiles. Analysts say the two programs are closely intertwined.

In fact, China has used anti-missile tests as cover for offensive anti-satellite development. Frank Rose, the U.S. State Department’s assistant secretary for arms control, said a 2014 missile launch that Beijing claimed was an anti-missile test was in fact an ASAT shot.

“Despite China’s claims that this was not an ASAT [anti-satellite] test; let me assure you the United States has high confidence in its assessment, that the event was indeed an ASAT test,” Rose said in a February 2015 speech.

“The ability to find, fix and track and hold … these types of capabilities are becoming increasingly more difficult. Hyper-glide vehicle technology can complicate our sensing and our defensive approaches.”

For U.S. missile defenses, Haney said: “We have to think about it and look at it in different ways so that, again, we are maximizing sensing to be able to understand what exactly is it going at so we can then look at how do we take it out.”

The Pentagon is looking at ways to counter maneuvering hypersonic missiles, possibly with an extended range version of THAAD and with lasers that can knock out the missiles before they reach their cruising speed of more than 5 times the speed of sound.

China has conducted seven tests of its DF-ZF hypersonic strike vehicle that U.S. intelligence estimates will be used primarily to deliver nuclear weapons through missile defenses. A conventionally armed variant is also possible.

The growing development of missiles, anti-missiles and space weapons are indications that any future conflict is going to be extremely damaging to a world that has become increasingly dependent on its high technology.