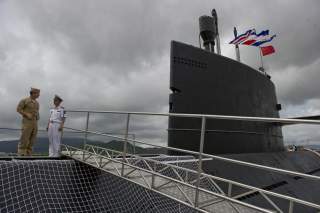 The development of the Chinese People’s Liberation Army (PLA) is of the utmost importance for not only U.S. strategic thinkers but as we as U.S. allies—specifically Australian strategic policy planning. There’s a growing realization in Asia and the United States that the PLA is gradually coming closer to developing a comprehensive “counter intervention” capability, better known in Western strategic debate as “anti-access/ area denial” (A2/AD). Beijing’s aim is to raise the costs of US military intervention in a conflict with one of its neighbors in East or Southeast Asia to a prohibitively high level—with potentially enormous ramifications for a regional security order long based on uncontested US military power in the Western Pacific. The newly released US Defense Department report on China’s Military is further testimony to China’s becoming a major military power in Asia.

Each year, the Pentagon is asked to provide the US Congress with a comprehensive, realistic assessment of the PLA’s evolution. Analyzing the military capabilities of a player as opaque as China is always challenging and earlier reports sometimes appeared a bit alarmist regarding certain PLA capability areas. But overall, the reports struck a balance between progress and shortfalls. This year’s version comes amidst growing regional anxiety about China’s growing maritime assertiveness (such as its recent oil rig dispute with Vietnam) and fierce exchanges between US and Chinese defense officials at the Shangri-La Dialogue.

Three findings of the report are particularly noteworthy:

First, the report reflects a growing frustration in Washington with China’s strategic behavior. Despite referring to regional uncertainties caused by PLA modernization, last year’s report (PDF) generally struck a positive tone in the context of the rather constructive “Sunnylands” summit between President Obama and his Chinese counterpart, Xi Jinping, in June 2013. Now the 2014 report bluntly states that “China’s expanding interests have led to friction between some of its regional neighbors, including allies and partners of the United States.” It also details the PLA’s provocation in the 2013 USS COWPENS incident and reiterates that the US “neither accepts nor recognizes” China’s new Air Defense Identification Zone (ADIZ) in the East China Sea. The report is thus in line with Washington’s increasing preparedness to confront China over its unwillingness to abide by established international norms of behavior.

Second, the Pentagon notes that the PLA has a “growing ability to project power at increasingly longer ranges.” It’s increasingly “preparing for contingencies other than Taiwan, including potential contingencies in the South and East China Seas.” Importantly, the 2013 “MANEUVER-5 exercise in the Philippine Sea, which included participation from all three PLAN fleets—the North Sea Fleet, the East Sea Fleet, and the South Sea Fleet—was the largest PLAN open-ocean exercise seen to date.” Critically, the PLA is now emphasizing “training under ‘realistic combat scenarios’ and the ability to execute long-range mobility operations.”

Third, the report highlights that China continues to modernize and increase its arsenal of ballistic and cruise missiles. It states that the “majority of China’s missile programs, including its ballistic and cruise missile systems, is comparable to other international top-tier producers.” As a result, US “bases on Okinawa are in range of a growing number of Chinese MRBMs (medium-range ballistic missiles), and Guam could potentially be reached by air-launched cruise missiles.” In this regard, a new study by the National Defense University also highlights the growing sophistication of China’s cruise missile capability. In combination with ballistic missiles, these systems pose a growing challenge to US ability to intervene in a regional crisis.

To be sure, the Pentagon acknowledges that the PLA still faces “several shortcomings in a near-term conflict.” Those include capability gaps in deep-water anti-submarine warfare (ASW) and doubts over the PLA’s ability to strike targets at sea beyond the so-called “first island chain.” Moreover, the PLA Navy’s operational reach beyond East Asia continues to be restrained by limited logistical support, particularly in the Indian Ocean. But it’s reasonable to assume that over the next decade or so, the PLA will work to address those weaknesses. For instance, there are signs that China is investing more systematically in ASW capabilities.

China’s military is becoming more powerful and that gives Beijing more options to throw its weight around. Of course, China isn’t a military superpower like the US, capable of global reach. But Beijing doesn’t need military parity with the US to contest critical parts of East and Southeast Asia. What matters is that it’s seen to be able to impose significant costs on US forces deployed in the region and that it appears to be more self-confident in its ability to deter Washington in regional crises.

Some believe a stronger, more assertive China increases the possibility of serious miscalculation between China and the US. That’s not clear. But pressure is growing on the US and its allies and partners to develop a deeper understanding of what to do about the broader Asian power shifts. In the case of the Australia-US alliance it’s more important to move toward practical defense cooperation across the whole spectrum of military capabilities rather than to engage in more discussions of defense spending and “strategic choices.”

Benjamin Schreer is a senior analyst at ASPI. The above was first posted at ASPI’s The Strategist here.