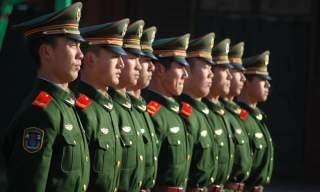 In a new analysis by Richard Fisher and James Hardy, IHS Jane’s reports that “A series of Chinese military exercises between late May and early June showcased the ability of the People's Liberation Army (PLA) to project land, air, and naval power into the area around Taiwan.”

The exercises demonstrated the People's Liberation Army’s plan to use civilian ships during emergencies to help boost its forces.

“To compensate for the relatively small size of its formal naval amphibious transport fleet the PLA has co-funded construction of a large number of ferries used by civilian companies. They will be made available to the PLA during emergencies and are a frequent element in civil-military transport exercises,” Fisher and Hardy write.

Included in these drills, for example, was a 20,000-ton roll-on/roll-off (ro-ro) ferry that was assigned to the Transportation Department of the People's Liberation Army Air Force (PLAAF). During the drill, the ferry helped transport troops and trucks from the Bohai Sea to the South China Sea.

Fisher and Hardy, citing an Asian government source, assess that in the event of an invasion, a combined military and civilian effort could transport between 8-12 PLA divisions to Taiwan.

The National Interest had previously reported on the drills, noting last week that China announced that the People’s Liberation Army Navy (PLAN) and People’s Liberation Army Air Force (PLAAF) were conducting a joint exercise near the Bashi Channel. The channel sits near islands owned by the Philippines and Taiwan, and the drills were conducted near both of those countries’ Air Defense Identification Zones (ADIZ).

TNI noted at that time that as part of that exercise, the PLAAF had sent its most advanced H-6K bomber near the channel, along with other aircraft like the H-6G and J-11 air superiority fighter. TNI also wrote at the time:

The apparently now routine joint air-sea exercises China is conducting in the area are likely to greatly unnerve Taiwan. One perceived weakness of China’s military forces are their lack of training, particularly joint training among China’s different military services.

An assault on Taiwan would require the seamless integration of Chinese naval and air assets along with amphibious forces. Thus the drills, which China’s defense ministry claimed were not directed at any specific country, will enhance the PLA’s preparedness for an attack on Taiwan.

The drills appear to be aimed squarely at developing these capabilities. Indeed, besides the civilian ships used in the exercises, IHS Jane’s notes that a naval formation consisting of the Type 052B destroyer, a Type 054A frigate, and a Type 904 underway replenishment ship also took part in the drills. The Type 052B destroyer, in particular, would be used as part of an invading force to help provide air defense for the amphibious forces.

China's sole aircraft carrier is also participating in a drill this week. It is unclear if that exercise is related to the ones simulating an attack on Taiwan.

The PLA drills coincided with Tsai Ing-wen, the head of Taiwan’s Democratic Progressive Party (DPP), visiting the United States. The DPP has traditionally been the Taiwanese political party that is most opposed to the People’s Republic of China, as well as reunifying Taiwan with mainland China. It has also traditionally opposed the “one China principle” as the starting ground for diplomatic relations with mainland China.

(Recommended: Taiwan's Master Plan to Defeat China in a War)

Tsai is likely to run for president in Taiwan’s 2016 elections. The DPP scored a landslide victory in Taiwan’s local elections last year, leading many to believe it could take the presidency in 2016. This would likely great irk the PRC and its president, Xi Jinping.

This isn’t the first time the Chinese military has simulated an invasion on Taiwan. As The Washington Times reported back in the fall of 2013, “More than 20,000 Chinese soldiers, sailors and airmen carried out a boisterous joint-operation exercise this month, with Taiwan as the apparent simulated target of a Normandy-style invasion.”